Accessibility links
Paul The Octopus Predicts: Spain Over Germany : Show Me Your Cleats! - World Cup 2010 Blog Paul, the German Octopus uses his nine brains to tap into his sixth sense.  So far he has predicted all of the German team's wins in this World Cup.  But, Paul chose Spain to win today's match: Ay Dios Mio! 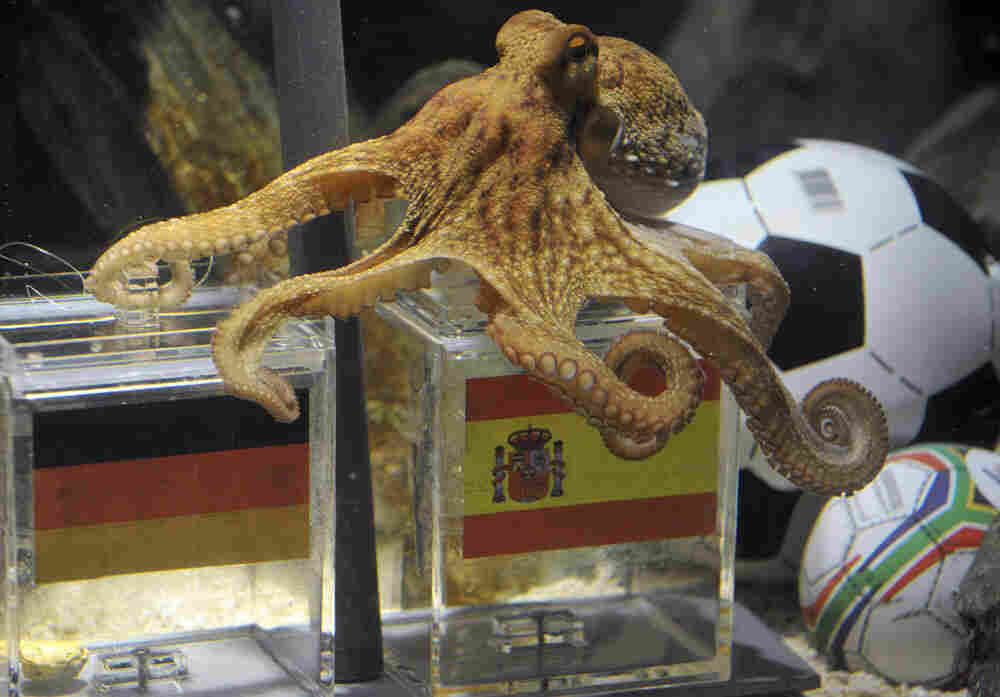 If you've been following the World Cup, you know about Paul. He's the 2 1/2-year-old octopus who lives at Sea Life Aquarium in Oberhausen, Germany.

So far, Paul the Octopus has used his nine brains (one main and eight smaller brains in each arm) to tap into his sixth sense and he's picked Germany to advance out of the the first round (including the 1-0 loss to Serbia), win the round of 16 and the quarterfinal matches.

"It's a cute octopus," Paul's keeper, Oliver Walenciak, told me over the phone. "We've been playing quite a lot. He's an active octopus and I would say we've fallen in love with him."

The team who take care of Paul started this game two years ago during the European Championships. Basically, they set up two, square glass jars in Paul's aquarium, one with a German flag and one with the opposing team's flag. Paul's handlers then put mussels in both jars and whichever jar Paul chooses to eat from is the team that he predicts will win.

Walenciak is referring to Paul's prediction yesterday (maybe it was the stress of making the choice on live television) where he ate from the glass jar with the Spanish flag on it. Germany and Spain meet  today in the semifinals and the winner moves on to face the Netherlands in the finals this weekend.

If Paul is wrong, Germany will meet the Netherlands on the pitch, giving this octopus one more chance to redeem himself. Sea Life Aquarium is in Oberhausen, on the border with the Netherlands, a fact that makes Walenciak nervous.

"I'm rather afraid that the Dutch will come and see what he's doing and try to influence his prediction," he said.

Whatever happens, Walenciak assured me that Paul will not become an octopus frankfurter until he dies of natural causes.