Accessibility links
Possessed By Time Of Possession : Show Me Your Cleats! - World Cup 2010 Blog During the Spain-Germany semifinal, Mike Pesca began jotting down the official time-of-possession statistics. But he was surprised at the official stats announced at the end of the game.

Possessed By Time Of Possession

Possessed By Time Of Possession 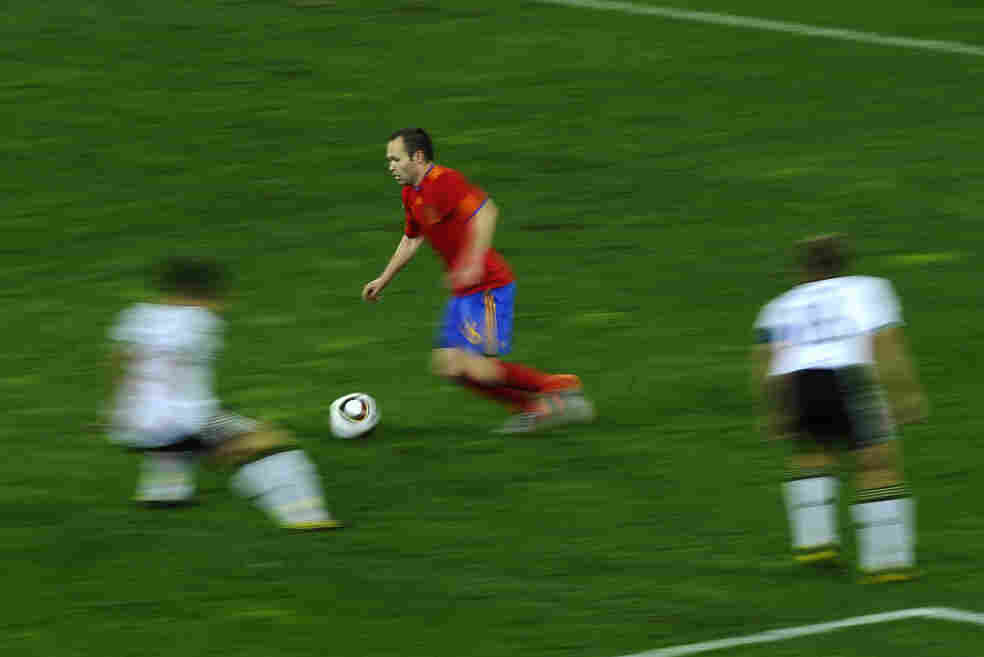 During the match I was so impressed with Spain's control of the ball that I began jotting down the official time-of-possession statistics.  In the 68th minute I noted that Spain had possessed the ball for 64 percent of the game to Germany's 36 percent. The 68th minute was the last time I looked at the stat because action really began heating up, with the one goal coming in the 73rd minute.

After the match I was pretty shocked to see that the official stats had Spain with only a 51 percent to 49 percent advantage.  The ESPN radio announcer, JP Dellacamera, questioned the accuracy of that final possession stat and so did I.  Looking back, that 68th minute statistic, if accurate, meant that from the 68th minute on, Germany would have had to had an 84 percent to 16 percent possession advantage to have the final stats wind up as 51 percent to 49 percent.

So I went and got a second source on the stats. Mark Burkhart of Match Analysis was a youth soccer coach with a penchant for stats who parlayed his interest into a business that counts several top club and national teams as its clients. Match Analysis stats show that Spain actually had a 56 percent to 44 percent overall advantage in possession, which comports much more with the game I saw.  He also notes that after the goal, Germany did begin to dominate the ball, by a 2-1 margin in fact, but nothing like the better than 4-1 margin that the official match stats would lead you to believe.  He also calculates time of possession by total touches, which is a useful addition to the official stat sheet.  I've included all the stats he compiled below.