Accessibility links
Who Will Win The World Cup? : Show Me Your Cleats! - World Cup 2010 Blog Spain and the Netherlands haven't mixed it up since the Peace of Westphalia ended the Eighty Years' War in 1648. Now they're both in pursuit of their first World Cup title. On Sunday, they clash in South Africa.

Who Will Achieve World Soccer Domination?

Who Will Achieve World Soccer Domination? 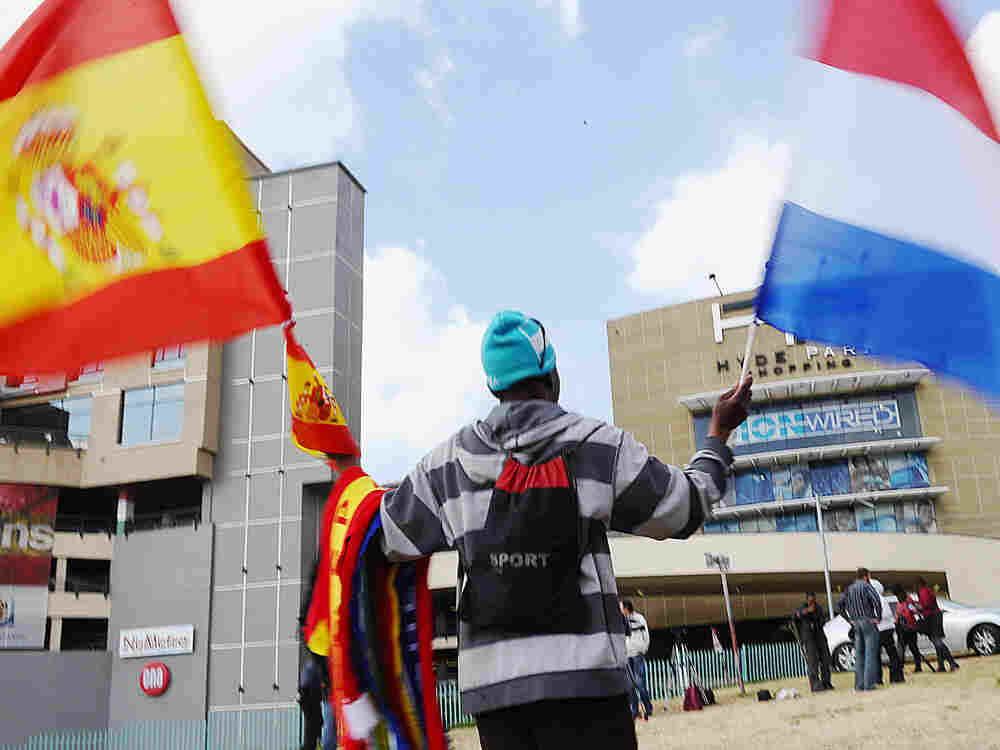 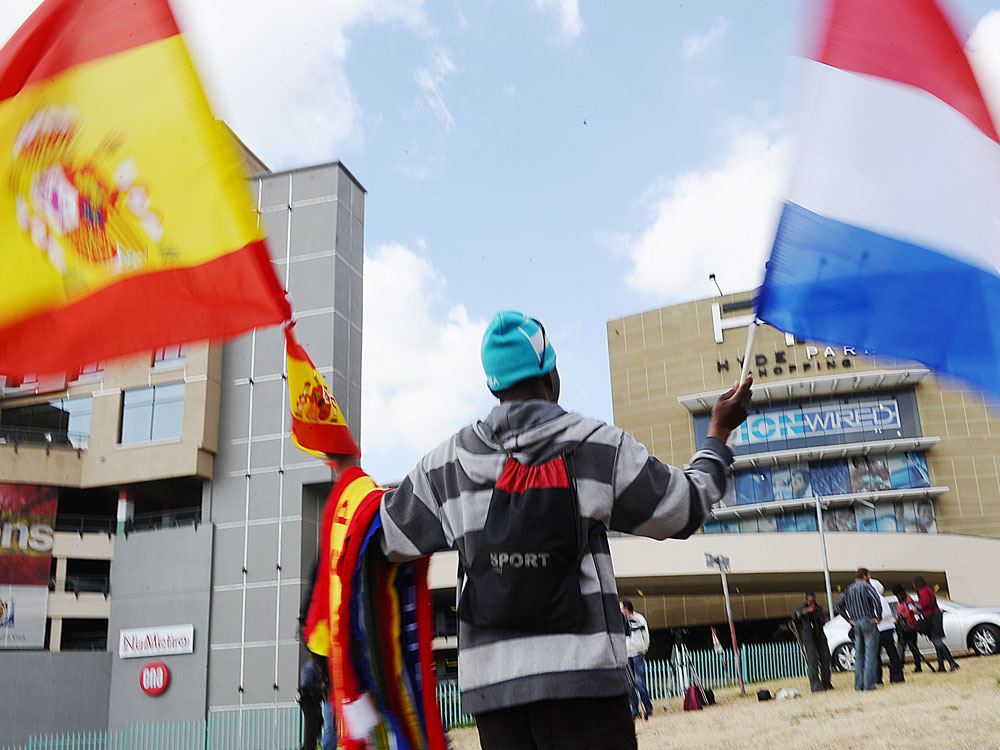 A street vendor sells flags from Spain (L) and The Netherlands.

After 26 days, 62 matches, 139 goals, 874 theatrical dives by players seeking fouls, 236 bad refereeing decisions (we made those last two numbers up, but they are in the ballpark) it has come down to this: Spain vs. the Netherlands for world soccer domination.

No easy cliches here about Old World versus New (Argentina vs Spain). No intense rivalry founded on a history of political and military conflict (England vs Germany). Pretty much no geopolitical significance at all to make tabloid headline writers salivate.  Instead we have a final between two European nations who haven't mixed it up since the Peace of Westphalia in 1648. It really is just a soccer match, and it should be a pretty good one for purists and casual fans alike.

Storyline: Which team joins the elite club of nations who've won the World Cup? Spain and Holland have never hoisted the trophy. The Dutch came closest in 1978, losing a heartbreaker to Argentina. Spain has never made the final, having been a perpetual underachiever for decades. Both teams come into the game with tremendous records. Holland has won its last 10 games, while Spain has been on a roll since winning the 2008 European Championships.

If the result was simply predicated on the quality of the individual players on the field, this wouldn't be much of a contest. Spain's team is larded with talent. This is Spain's so-called "Golden Generation." Xavi Hernandez and Andres Iniesta play alongside each other for Barcelona and are at the heart of the best midfield in international soccer. David Villa is tied for the World Cup scoring lead with five goals in six games, most of them highlight-reel gems. No team passes the ball as well as the Spanish. At their best they play with a creativity and panache that represents everything that's best about the "beautiful game."

But Spain hasn't been at its best in South Africa.  If a team can be said to have scraped into the World Cup final, Spain has.  True, they defeated a good German team in the semi-finals, yet a mediocre Paraguay side gave them fits for 80 minutes in the quarter-finals, and they actually lost to Switzerland in their first group match (no team losing its first match has ever gone on to win the World Cup final). Depending who you talk with, Spain is either peaking at the right time, or has been plain lucky.

Despite dominating possession in the games they've played, the Spanish have never looked especially dangerous around goal, relying almost entirely on David Villa to score. Star striker Fernando Torres, returning from knee surgery, has been at less than his brilliant best. At the other end of the field, Iker Casillas, one of the world's best goalkeepers, has looked surprisingly shaky at times, and Spain's fullbacks, Sergio Ramos and Joan Capdevilla, haven't inspired confidence either. They'll have to deal with Holland's dynamic winger Arjen Robbin, who threatens every time he gets the ball. Spain is the favorite, but is far from unbeatable.

As for Holland, it has had a relatively easy route to the final, except for that famous victory over Brazil, which had as much to do with Brazil's self-destruction as it did with Dutch inspiration.  The Netherlands used to be beautiful losers, playing gorgeous "total football" that invariably ended with them getting beaten by teams that outmuscled them.  Dutch coach Bert van Marwijk has substituted a degree of pragmatism for idealism.  He's also succeeded in getting the Dutch to mesh as a team, avoiding the behind-the-scenes dramas and feuds that undermined the squad in the past.

If the Netherlands are to win, much will depend on inspirational midfielder Wesley Sneider. The Inter Milan player has had a magnificent World Cup. He needs one more great game.  Arjen Robbin must fancy his chances against the Spanish fullbacks.  But beyond those two there are a lot of questions.  Arsenal striker Robin van Persie was supposed to be one of the breakout stars of this tournament, so far he's been church-mouse quiet.  And even the Oranje's biggest fans admit the defense is about as leakproof as a dyke plugged with tissue paper. Captain Giovannei Van Bronckhorst is 35 and retiring after the finals, it’ll be his seventh game in less than a month on aging legs. Spain’s pinpoint passing could well dissect a Dutch back line that sometimes appears to be running in clogs.

Key Players: This game will be won and lost in midfield; Xavi and Iniesta for Spain and Sneider for the Dutch. Keep an eye out for striker Fernando Torres, who Spanish fans are hoping will finally find his goal-scoring form.

One other key player worth a mention: the referee. FIFA has selected Englishman Howard Webb and his two English assistants to take charge of the big game, so at least three Englishmen will get to take the field in the World Cup final; eat your heart out Wayne Rooney. As we've noted in Cleats, referees have played too big a role in this World Cup, courtesy of a series of egregious decisions. Webb has had a very good tournament to date. By all accounts, he's been authoritative, without going crazy with yellow and red cards. Here's hoping that after the game, we don’t have any reason to mention his name.

Turpin: Spain should out-class the Dutch. However, rational, empirical analysis hasn't helped my prediction record to this point, so I'm going with my gut this time.  Something tells me this is the year of the Oranje.  Holland to win 2-1.

Sweeney: Both empirical evidence and gut are in synch. Spain to out-pass static Dutch defense. Spain to break 1-0 habit and win 3-1.

Oh, I suppose we should say something about the third place game.

Storyline: Will German striker Miroslav Klose be fit enough to play? He has a chance to become the top scorer in World Cup history in what will be his last World Cup game.

Key Players: Germany will have its superb young striker Thomas Mueller back from suspension, while Luis Suarez, whose infamous handball robbed Ghana, will likely be in Uruguay's lineup; Two terrific talents who were much missed by their teams in the semi-finals.