Accessibility links
What Science Says About The World Cup Ball : Show Me Your Cleats! - World Cup 2010 Blog You'd assume the a new, smoother ball would make be faster and steadier. But you'd be wrong. 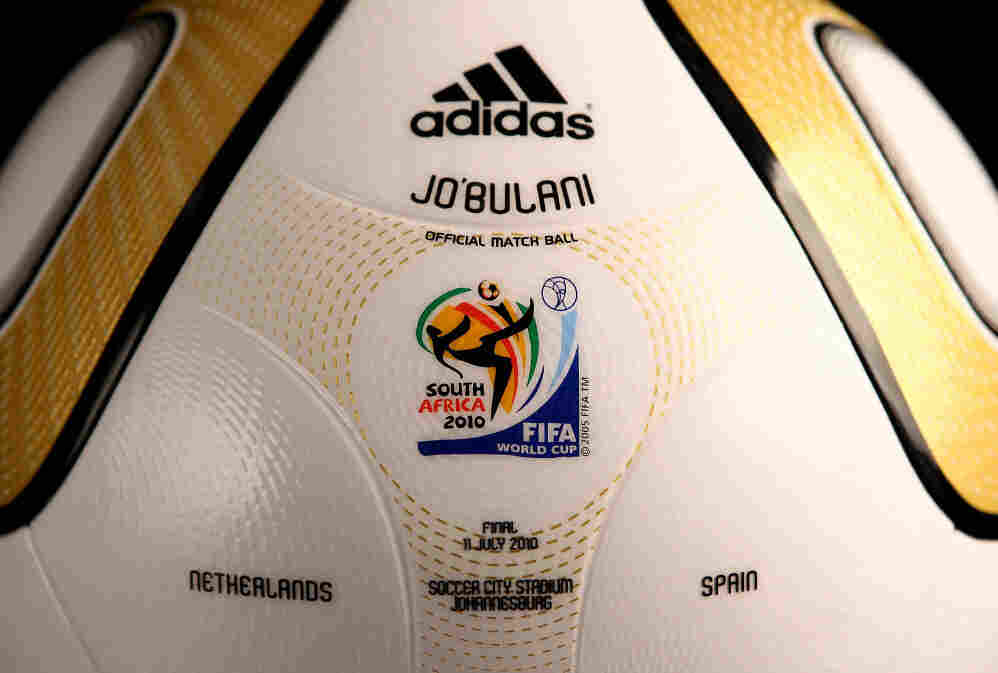 A view of the personalisation of the adidas Jo'bulani official match ball for the 2010 FIFA World Cup Final between the Netherlands and Spain. This ball was named slightly different than the one that has been used throughout the tournament. Richard Heathcote/Getty Images Europe hide caption

A bit more surprising is the controversy caused by the tournament’s ball.

Adidas created the Jabulani especially for the South African World Cup. It’s made from thermally bonded panels, instead of the traditional 32 panels of pentagons and hexagons.

That makes it a lot smoother, but has given the players fits.

“You might think if you make a ball very, very smooth, it will fly through the air better than a ball that is rough,” says John Eric Goff, chair of the physics department at Lynchburg College and author of Gold Medal Physics: The Science of Sports.

“As the air goes around a sphere, or one of these sports balls, it forms a little layer near the surface of the sphere called the boundary layer,” says Goff. A rough surface makes that boundary layer break down at lower speeds.

“And what that means is the drag force on the ball, the air resistance, goes down slightly,” he says.

With only eight panels, you might think the Jabulani would be much smoother than a traditional  ball, but you’d be wrong. Adidas has added grooves on the Jabulani that make up for the missing seams. Still, there seems to be less drag, less air resistance on a Jabulani when it’s traveling very fast than on a traditional ball.

But more difficult than speed for player’s to get used to is what’s called the knuckling effect. This is when the ball starts behaving erratically because the boundary layer is breaking down at different places around the ball.

“There is an ideal speed for the maximum knuckling effect,” says Rabindra D. Mehta, chief of the Experimental Aero-Physics Branch at the NASA Ames Research Center in California. For a traditional soccer ball it’s around 30 miles per hour.

But for the Jabulani, it’s more like 40 or 45 mph. So it’s flying more erratically at faster speeds.

Incidentally, despite what you might have seen in blogs or newspaper reports, NASA has not investigated the Jabulani. Mehta says he and some colleagues did a demonstration of the aerodynamics of flying objects for local school children, and used the Jabulani as an example.

“There’s a lot of media coverage with all sorts of crazy headlines  claiming NASA is doing this and that. We’re not doing anything,” says Mehta. “We just wanted to demonstrate soccer ball aerodynamics to children.”

That may be so, but it’s hardly a headline grabber.