Accessibility links
Rough And Tense, Spain Wins World Cup 1-0 : Show Me Your Cleats! - World Cup 2010 Blog This World Cup final match was rugged: not the artistry Spain is known for, nor the beauty Oranje generally brings to the pitch.  In the end, the Spanish take the golden trophy with just one goal. 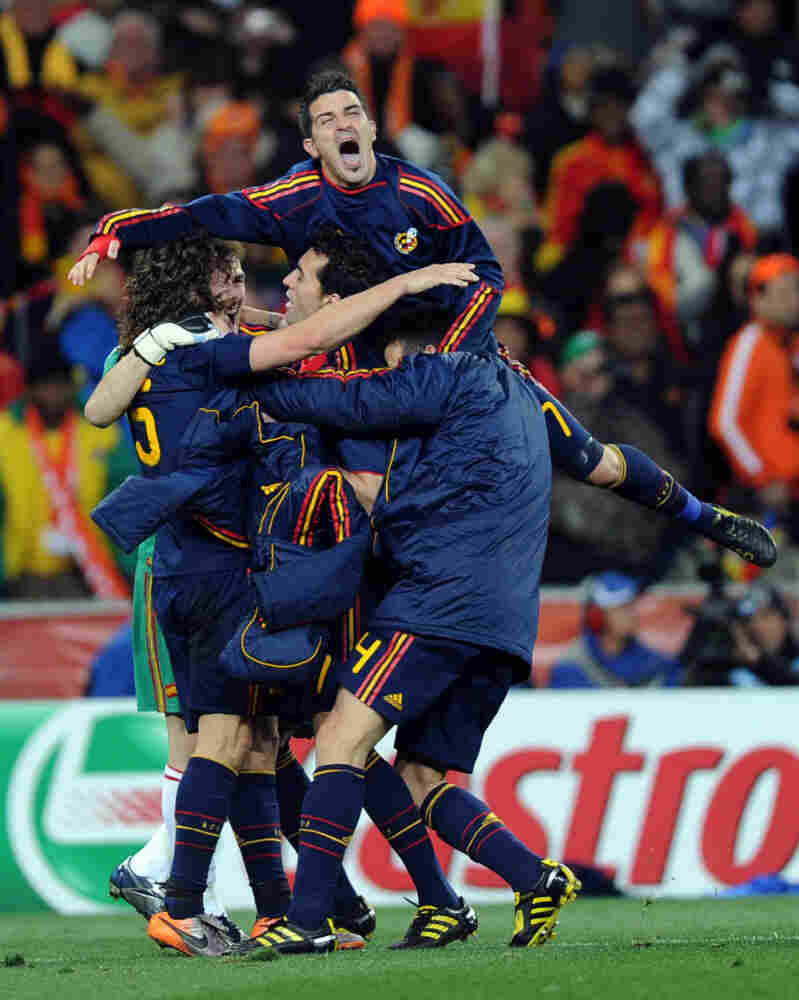 World Cup 2010 is done with Spain the victors over the Netherlands: 1-0

The Spanish team made history today, making their first World Cup final, then winning it, and the cherry on top: being the first team to win the World Cup after losing their first game in the tournament.

Spanish players resplendent in their navy blue jerseys and the Netherlands’ on fire with their electric orange kits were quite a sight to behold in Johannesburg’s Soccer City Stadium.

But, the play was ugly and tense in the first half with rough challenges from both sides. English referee, Howard Webb, whipped out his card holder 5 times in the first 45 minutes: three yellows for the Dutch (Van Bommel, Van Persie, and De Jong) and two for Spain (Puyol and Ramos).  De Jong’s yellow was for one of the nastier challenges, a high kick to Xabi Alonso’s chest.  He could, and probably should, have been sent off.

Spain looked strong, confident, calmly passing in that Spanish style, in the first minutes of the game, but the Dutch played a rough and rugged game that shut the Spanish down.  And they looked strong at the very end of the half with a great shot from Arjen Robben almost on half-time.

The second half was not as rough, but choppy, so much whistle blowing, falling, stopping, starting and "free kicking" -- it was enough to drive even the most seasoned soccer enthusiast, crazy.

At 62 it was Arjen Robben vs. Spanish goal keeper, Iker Casillas -- it was looking bad for Spain as Robben powered toward the goal and, and, and -- MISSED.  And it was Spain's golden chance at 76 minutes when Xavi took a corner kick headed by Ramos WAAAAAY over the top of the goal.  Then, 82 minutes in, Robben with another wonderful one-on-one chance, again saved by Casillas.

More yellow cards: minute 55, Heitenga on the Dutch side and Arjen Robben at nearly 84 minutes after an episode of whining and complaining that made a two year old brat seem logical and diplomatic.

In extra time there were few opportunities to score and those few were missed.  Iniesta with a great run on goal at 99 minutes that he bumbled at the last moment and Fabregas with another miss at 103.

The beginning of the end for the Dutch came shortly into the second period of extra time. Heitenga got a second yellow card for shoving Iniesta to the ground on his run toward goal and was sent off, leaving the Dutch with 10 men.  Free kick for Spain at 110, but Xavi with the miss, free kick for Sneijder at 114, but another Dutch miss.

It was Spanish midfielder Andrés Iniesta who made the first and only goal at nearly 117 minutes into the game after a bad cross from Torres and a quick pass from Fabregas dissected the shorthanded Dutch defense.  Iniesta took the chance beautifully.  And that's all Spain needed for a deserved win, that's all they've needed to win this entire tournament, ONE GOAL.

But, we all know the real winner of this championship is Paul...the octopus.