Accessibility links
Adiós World Cup, My Children Will Miss You Most : Show Me Your Cleats! - World Cup 2010 Blog NPR foreign correspondent, Jason Beaubien, writes about the significance of the World Cup now that his kids are old enough to care.  Maybe he'll be on assignment in Brazil for World Cup 2014.

Adiós World Cup, My Children Will Miss You Most

Adiós World Cup, My Children Will Miss You Most 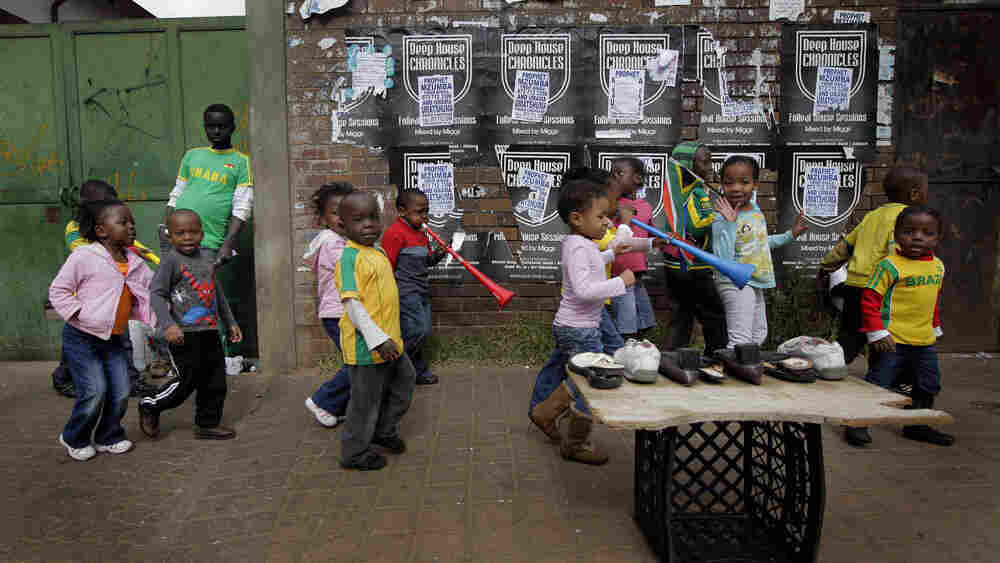 This was my first World Cup during which my children were old enough to engage in the event.

My boys are five and seven.  To them the World Cup is a month-long spectacle filled with heroes and villains; crazy fans from far off lands covered in facepaint; vuvuzelas and grown men with funny nicknames. Each day epic battles played out between giants: Messi versus Chicharito; Cristiano Ronaldo versus Sergio Ramos.

My sons were born in South Africa and we now live in Mexico. So for the opening game their loyalties were torn between the country of their birth and their current home.

Schools across Mexico showed the Mexico/South Africa game live.  Finn, the seven-year-old, decided to back South Africa despite having his entire class against him.  He convinced his best friend Carlos to join him and they were a two-man rooting section in a sea of green Mexico jerseys. Fortunately the match ended in a tie.

Even before the first game both Finn and his younger brother Emile had sticker books in which you can paste pictures of every player from every country in the tournament.  Collecting the players became an obsession.  Finn screamed with joy when he finally completed Italy, his first full team.

One of their favorite characters from the Cup has been El Pulpo Paul!  You can only mention Paul the Octopus' name with an exclamation point at the end.  And as it should be.  A mollusk who can accurately predict the winner in game after game deserves respect.

Finn was astonished after the Round of 16 that there were no longer games every day.  It was hard to swallow.

He now retrieves the sports section of the newspaper each morning from the front door. He pours over it at breakfast announcing who's won, who's scored and what the next match ups will be.

Each game brought some new act of bravery, daring or intrigue. Little Serbia defeating the powerful Germans. Switzerland upsetting Spain. Landon Donavon scoring at the last minute against Algeria to propel the U.S. out of the Group Stage.  Luis Suarez using his hand to block a certain goal by Ghana and in the process saving his nation Uruguay the humiliation of defeat.  Frank Lampard's goal against Germany that the refs just didn't count.  And the victory dances.

The 5 year old, Emile, can shake his hips as well as any South African striker. He demonstrates it at dinner. Finn does a great imitation of Spaniard David Villa's palms to the heavens, look-at-me-I-just-scored pose.

The boys have taken to playing a lot more soccer themselves in the garage.   They yell, "Gol!" for even the feeblest of shots and issue yellow cards with abandon.

Finn has also declared that he's not going to cut his hair.  Clearly this is in deference to Diego Forlan, Sebastian Abreu, Lionel Messi and some of the other long-haired South American stars.

It's hard to believe that we'll have to wait four more years for the next round of World Cup drama in our house.