Accessibility links
Los Muertocitos, the Little Deaths : Soapbox Correspondent John Burnett reporting from Juarez, Mexico, one of the most violent cities in the hemisphere. 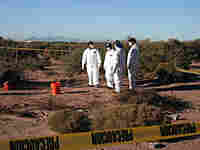 Juarez, Mexico, is one of the most violent cities in the hemisphere. This year, it's broken its own record--1,300 murders and counting--as rival cartels fight over the lucrative smuggling corridor to El Paso, Texas. So far in 2008, 62 police officers have been killed and last week, the city's best known crime reporter, Armando Rodriguez, of El Diario de Juarez, was gunned down while sitting in his car in his garage.

For news photographers and videographers who go out everyday in search of images to convey life in this industrial city of 1.5 million, this has been a memorably bloody year. Bodies turn up everyday, all day.

Producer Peter Breslow and I spent all day Tuesday with the photographers to get a sense of what their work is like in this violent city. The day began "muy tranquilo," El Norte veteran Raymundo Ruiz told us wearily. At 2 pm, the first solid police report came in--human remains discovered in a shallow grave south of town. Raymundo drove aimlessly through the dusty barrios of south Juarez until he spotted a white van bearing the letters of the medical examiner, then he raced to catch up with it. He chattering excitedly into his walkie-talkie to alert the other journalists. With heightened threats against reporters, they have decided to arrive at crime scenes en masse, believing there is strength in numbers. 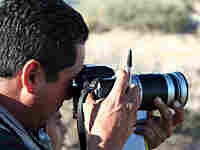 Raymundo followed the van in his rattletrap Toyota down an unpaved road into the desert, through thorn bushes and piles of household trash. The police had already taped off the crime scene when we arrived. Excited children had come over from a nearby residential complex to watch the exhumation. They stood on a hillock where they could see the forensic agents in their white bio-suits gingerly turning the sand. A rib cage and femur protruded from the earth.

Within minutes, more and more photographers descended on the scene. The journalists traded jibes, the forensic excavators bantered, the children giggled and threw gang signs for the cameras. Felipe Castro, a 26-year-old soccer referee, enjoyed brief celebrity as the discoverer of the body. "It's really not a big deal," he said, as his friends crowded around to hear him interviewed. "They find bodies out here in the desert all the time. It's the reality we live here in Juarez."

Asked how typical this festive crime scene was, a Diario photographer, Lucio Soria, commented that it was only unusual in that the burrito, candy and soda vendors were not there.

"It's like a picnic," he said, shaking his head.

And how important was the discovery of this body in the relentless daily tally of killings in Juarez.

"Cada dia hay los muertocitos," he said with a shrug. "Everyday there are the little deaths."

Then he excused himself and hopped in his car to race to the next photo op on the opposite side of town: two men had been machine-gunned in their Jeep in a barrio within sight of the US border.