Accessibility links
Tod Machover's New Opera : Soapbox For our Music and Technology series this week, we talked to MIT's Tod Machover about his so-called hyperinstruments -- and their implications for the future of music making. But due to the time constraints of radio, we weren't able to keep in the ... 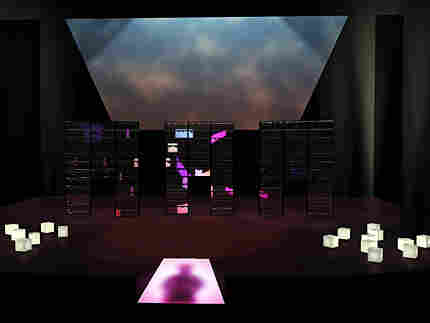 A conceptual rendering of the stage for Death and the Powers, Tod Machover's newest opera. MIT Media Lab hide caption

There was a lot we had to leave out of Liane Hansen's interview with Tod Machover. He spoke for more than 35 minutes for a six-minute segment, and some of it was some pretty heavy stuff. Like, what if we could invent an instrument (a hyperinstrument, in his parlance) which was as natural and easy-to-play as the Guitar Hero controller -- but capable of the expressivity of a piano or cello? Wouldn't it blur the lines between the highly-skilled musicians and the complete dilettantes? (Ahem.) The performers and the audience? Would it unlock the artistic potential in all of us?

Fortunately, we were able to preserve most of the weighty philosophical implications of so-called hyperinstruments. One important subject we weren't able to keep in the on-air interview, however, was the new opera Tod Machover was working on.

Not the opera that debuts next weekend, Skellig -- the man was juggling too many thoughts even to get around to talking about that. Not the Brain Opera, which is something akin to David Byrne's musical building, but predates it by about 12 years. Rather, Machover's latest endeavor is called Death and the Powers, and is set to premiere next fall in Monaco. 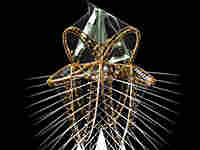 The musical chandelier which is also a hyperinstrument. MIT Media Lab hide caption

Wrap your mind grapes around this: the plot is basically that a wealthy and powerful man, seeking a sort of immortality, "downloads" himself into his surroundings so he can have infinite influence over his legacy. And like all things Machover, the staging will be as important as the story and the score. Yes, there will be hyperinstruments. And musical chandeliers. And, like everything that involves the future, robots.

Anyway, hear him explain it here:

More information on the Death and the Powers can be found on Machover's Web page here.