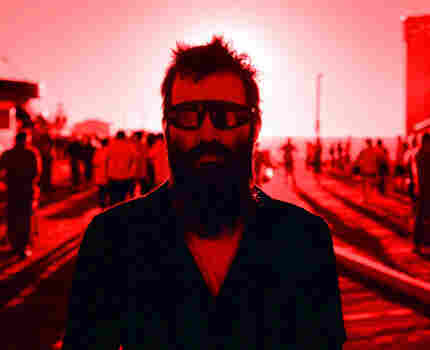 Mark Everett says he looked in the mirror one morning and saw a werewolf staring back at him. He came close to shaving off his beard because it didn't fit the music he was currently writing. But then he thought, Hey, why not go with this?

Everett -- more widely known as E -- is the creative force behind the band, Eels. And their new album, Hombre Lobo (translation: wolf man), is out this week.

Sometimes the songs are downright primal. "Sweet baby, I need fresh blood," he sings on Fresh Blood before emitting a wolfish howl. Other times the songs are sweet -- more like a wolf cub maybe... backed by quiet string arrangements.

It's their first album of new material in four years, but E's been busy in the meantime. He wrote a memoir, Things the Grandchildren Should Know, and worked on a documentary about his father, Hugh Everett -- a physicist famous for coming up with the Many Worlds interpretation in quantum mechanics. Mr. Everett told us that, after the film and the book, he was reluctant to put too much of himself in this new record.

But he took a moment to reflect on Electro-Shock Blues, his album that dealt explicitly with the death of his sister:

Before the interview, we also asked for your questions. One of them really stuck out, so we read it to Mr. E:

The full interview will go up after the show tomorrow, but until then you can listen to full tracks from the album here.