This week, one of Iran's leading women's rights activist, Sussan Tahmasebi, stopped by NPR to speak to Scott Simon about Iran's upcoming Presidential elections. Watch her YouTube video and scroll down further to read Tahmasebi's thoughts on how civil and political discourse in Iran has been influenced by the demands of women. You can listen to her radio interview with Scott tomorrow on Weekend Edition Saturday. 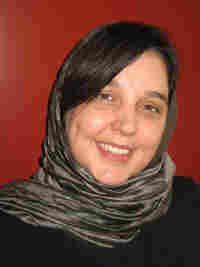 This shift demonstrates the importance and vitality of the Iranian women's movement and in particular the achievements of the One Million Signatures Campaign, a grassroots effort which seeks to raise cultural awareness about the negative impact of laws on the lives of women through face-to-face discussions and seeks to collect one million signatures in support of a petition addressed to the Iranian parliament asking that discriminatory laws be reformed.

Mehdi Karoubi: Mehdi Karoubi was the first presidential contender to clarify his thinking on women, which was outlined in a statement issued on May 20, 2009. In this statement as well as a later ones issued on civil rights he emphasized the need to review laws that discriminate against women, the need to ensure the presence of women in governmental and state decision making positions, including as ministers, as members of the guardian council, the expediency council and the council of experts.

Mr. Karrubi has emphasized the need to implement articles in the constitution that support women's rights and to try to sign on to the Convention on the Elimination of All Forms of Discrimination Against Women (CEDAW). He has also emphasized the need for women's access to education, the reversal of limiting educational policies pertaining to women adopted during the Presidency of Ahmadinejad and the important role of housewives.

In fact, Mr. Karoubi has been rather progressive in his declarations with respect to women's rights, human rights, citizen's rights, even the rights of minority groups, which has served to elevate the level of discourse in these respects within the elections and at least among the reformist candidates.

Mirhossein Mousavi: Mirhossein Mousavi, who has been identified as the main challenger to President Ahmadinejad, also issued a statement outlining his thinking and programs for women. This statement is very comprehensive and rather detailed in terms of policy initiatives he intends to adopt as President and calls for the re-examination of laws that discriminate against women, the joining of CEDAW with exceptions to ensure that it is in line with Islamic and cultural values, and working to empower women in the social, economic, professional and education spheres, through the adoption of policies addressing these issues as well as inclusion of women in decision making roles as ministers and high level managers.

In this statement he also commits to reversing some of the policies that Mr. Ahmadinejad had adopted with respect to placing quotas on the university entrance of female students. This statement also emphasizes the need to address the "glass ceiling" faced by professional women, a concept which was first introduced in Iran during the Khatami Presidency.

Mohsen Rezaee: Mohsen Rezaee too issued a statement outlining his views on women, in which he emphasized and placed great value on the traditional roles of women, especially housewives. In this statement he provided assurances about providing salaries and insurance to housewives, while also committing to taking steps to ensure the "equality" of women in society.

The use of the term equality between men and women is significant, but especially significant coming from a conservative candidate. Policy with respect to women in Iran has been defined in the context of equity, which emphasizes the concept of fair treatment of men and women but claims that women and men are different and therefore they have different roles, responsibilities and "rights".

Specifically Rezaee has proclaimed that he will pursue policies which seek to: bring about a balance in the rights and responsibilities of men and women within the family and the equality of rights for men and women in society; promotion of women's organizations; and the fair distribution of opportunities and resources for women in sports, education, professional and jobs, health and production and business.

Mahmoud Ahmadinejad: While President Ahmadinejad has been largely silent on his policies on women, his administration took several major steps in this respect, which have come under severe criticism by women's rights and human rights activists. These include the changing of the name of the Center for Women's Participation to the Center for Women and Families, which has worked ever since to promote the role of women as mothers and wives.

The adoption of the Social Safety program, which targets women on the streets for their Islamic dress, the adoption of quotas limiting the entrance of women into university and proposals designed to ensure that women attend university in their local communities, unless they have the permission of their fathers or husbands to do otherwise--a concession after the proposal received great criticism.

Additionally, Ahmadinejad included two contested and highly criticized provisions in the Family Support Bill put forth to the parliament by the Judiciary. In and of itself this intrusion in the domain of the Judiciary by the executive branch was unprecedented and received great criticism from women's rights groups as well as the Judiciary. The two provisions sought to ease restrictions on polygamy and impose a tax on Mehrieh (the sum specified in the marriage contract which is to be paid to women at their demand and which is often the only safeguard women have after they get married, given their limited rights in marriage). Reportedly both measures have since been taken out of the Bill after outcry by women's rights activists and their march on Parliament. The revised Bill will be taken up for review by the full parliament after the elections.

Despite the fact that Ahmadinejad has been silent on women's issues in the Presidential race thus far, his Advisor on women's issues and the Head of the Center for Women and Families, broke her general silence on women's issues and speaking to the press in a surprising hostile tone, attacked the policies of reformists who had tried to sign onto CEDAW in the previous administration vowing to disclose damaging information in this respect. She went on to further attack the members of the One Million Signatures Campaign and also Shirin Ebadi.

Significant Trends in this Year's Elections Pertaining to Women:

Wives on the Campaign Trail: For the first time we are seeing the wives of Candidates on the Campaign trail with their husbands. Most notable is Zahra Rahnavard who Campaigns often hand in hand with her husband, Mirhossein Mousavi but also Fatemeh Karoubi, the wife of Mehdi Karoubi has taken an active role with respect to her husband's Campaign.

Use of the Internet as a Campaign Tool: Given the restrictions on the press, the Internet has served as a tool in promoting the messages of the Presidential candidates. Mousavi especially has a strong presence on the Iinternet. Facebook, the internet networking site was blocked in late May, but following objections by Presidential candidates and the public it was re-opened. The Internet and especially facebook has served as a tool for sharing information, including much information about the candidate's positions on women's rights.

Broaching the Subjects of Polygamy and Forced Veiling: In a promotional video for his Campaign, reformist cleric, Mehdi Karoubi is questioned on some critical issues by his advisors. Jamileh Kadivar, a former female member of parliament, questions him on his views about polygamy and forced veiling. The term forced veiling has never been used in the public broadcasts system in Iran. While Mr. Karoubi does not answer the question head on, he emphasizes that he does not believe in use of violence in ensuring appropriate Islamic dress for women. The use of the term "forced veiling" is term by political insiders and specifically in a promotional film by a cleric is extremely significant and important.

Sussan Tahmasebi is a women's rights activist based in Tehran and a founding member of the One Million Signatures Campaign. Sussan is also the editor of the English language website Change for Equality. In April 2007, she was summoned to court due to her participation in a peaceful gathering against discriminatory laws which took place for the first time on June 12, 2006. As a result she was sentenced to two years imprisonment; the court has subsequently suspended one and a half years of the sentence, leaving her to serve six months in prison for acting against national security. The appeal is under review.

Another founding member of the One Million Signatures Campaign, Ms. Parvin Ardalan, was banned from travel, at Imam Khomeini International Airport in Tehran in March 2008. She was on her way to Stockholm, Sweden, to take part in a ceremony in her honor as the recipient of the 2007 Olof Palme Award, an annual prize awarded for outstanding achievement in the spirit of former Swedish Prime Minister Olof Palme. She continues to be banned from travel outside the country.