Accessibility links
Solar Cities And Enviornmentalism In Egypt: An Update : Soapbox Last year, Weekend Edition Sunday took you to Cairo Egypt to learn about climate change. We have an update on the efforts of one group we met there. Solar Cities is still working in the Zebaleen community of garbage collectors, and has recently ex...

Solar Cities And Enviornmentalism In Egypt: An Update

Solar Cities And Enviornmentalism In Egypt: An Update 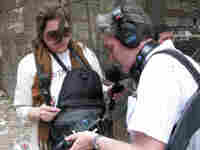 You can hear those stories here:

When I met Hana, he was in a tough situation. The USAID grant money, which the group Solar Cities was using to build and maintain solar water heaters in the impoverished community, had run out. Hana had only received a handful of private orders for the units. With his first baby on the way, he had returned to the family business of sorting plastics. 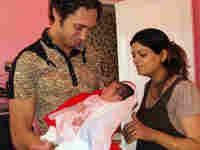 But since I visited in August, things have turned around for Solar Cities. The group has become a nongovernmental organization, which makes them eligible to receive new sources of funding. Solar Cities founder T.H. Culhane -- along with environmentalist Katey Walter Anthony of the University of Alaska, Fairbanks -- also won the 2009 Blackstone Ranch Institute Innovation Challenge Grant. The grant, given in partnership with National Geographic, will provide $50,000 toward research on biogas digesters, such as the one on Hana Fathy's roof. 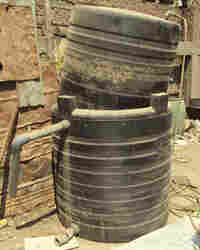 This biogas digester sits on Hana's roof. At the time this photo was taken, the unit was out of commission because rats had chewed through the pipes. It has since been repaired. Kimberly Adams/NPR hide caption

Additionally, a variety of private funding has flowed to the organization from schools and private individuals. Meanwhile, Hana was recently hired to work for the Sekem farm in Egypt, as their chief renewable energy expert. And, according to T.H. Culhane, Solar Cities has "secured funding to bring Hanna to Tanzania to train people in the building of solar and biogas alternatives (instead of) deforesting for cooking and water heating fuel."