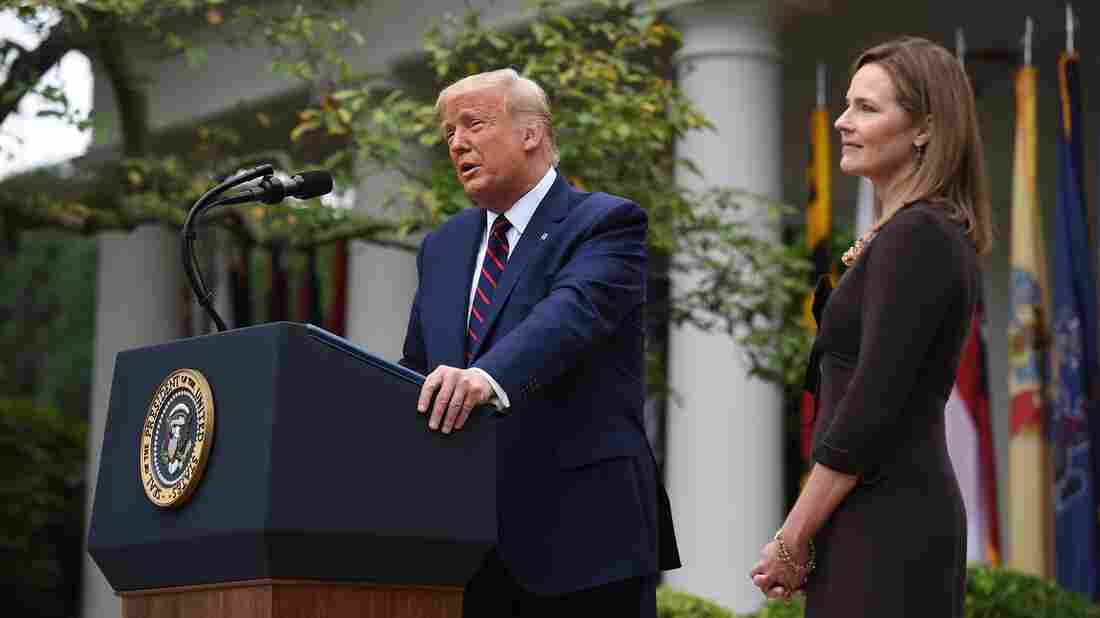 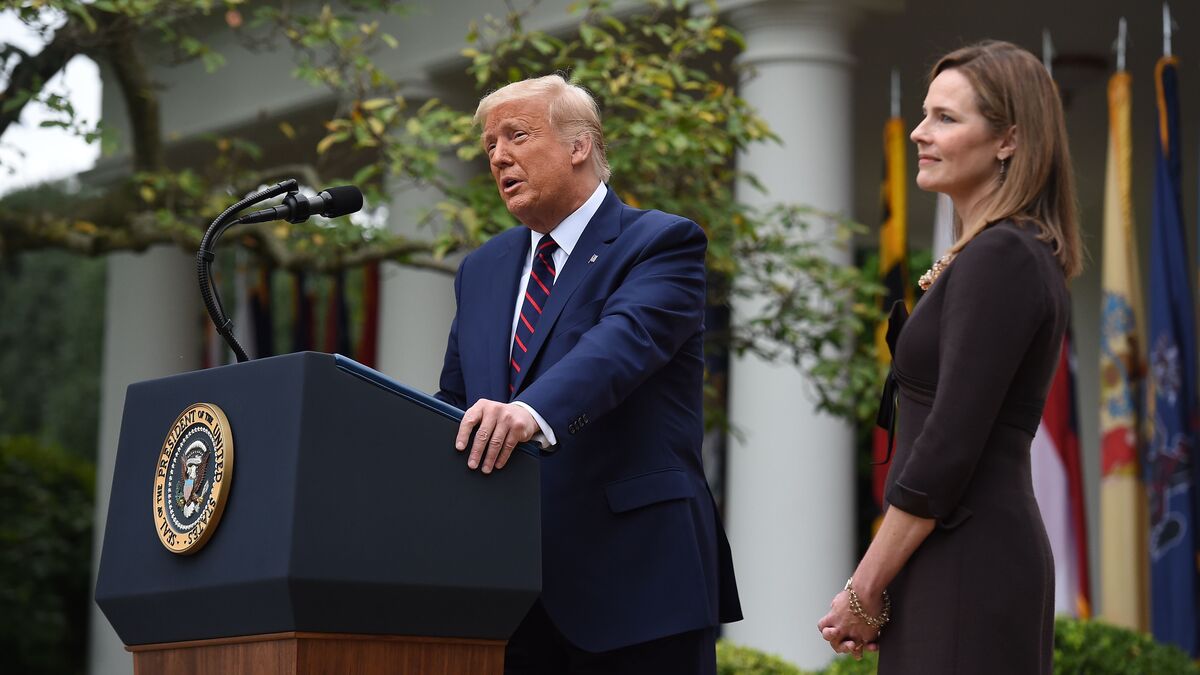 If confirmed by the Senate, the 48-year-old judge will solidify the court's conservative majority, shaping the trajectory of health care law, abortion rights and many corners of American life for generations to come.

From a White House Rose Garden draped with flags, Trump called nominating a Supreme Court justice one of the most important duties of his office and praised Barrett as a "one of our nation's most brilliant legal minds."

Who Is Amy Coney Barrett?

Cheers rippled through the crowd of about 200 people when Trump finally said Barrett's name.

"This should be a straightforward and prompt confirmation," Trump said. "Should be very easy. Good luck. It's going to be very quick. I'm sure it will be extremely noncontroversial. We said that the last time, didn't we?"

(Justice Brett Kavanaugh, Trump's previous Supreme Court nominee, was subjected to extra scrutiny by the public and Senate Democrats because of a sexual assault allegation.)

Barrett began her speech acknowledging the shoes she is being asked to fill, calling Ginsburg a "woman of enormous talent and consequence" who not only cracked, but "smashed" glass ceilings and won the admiration of women around the world.

The judge said she has been inspired by Ginsburg's close relationship with Antonin Scalia, the late conservative justice for whom Barrett once clerked.

"His judicial philosophy is mine, too," Barrett said as Scalia's wife and son looked on from the audience. "A judge must apply the law as written. Judges are not policymakers and they must be resolute in setting aside any policy views they might hold."

In introducing his nominee, Trump linked the weight of a Supreme Court appointment with a message he touts on the campaign trail, calling "law and order" the foundation of the U.S. justice system.

"The stakes for our country are incredibly high," Trump said. "Rulings that the Supreme Court will issue in the coming years will decide the survival of our Second Amendment, our religious liberty, our public safety and so much more. To maintain security, liberty and prosperity, we must maintain our priceless heritage of a nation of laws and there is no one better to do that than Amy Coney Barrett."

Barrett also introduced her husband and seven children, who were seated in the audience, joking that it makes sense that Trump is nominating her to join a bench of nine justices.

"As it happens, I'm used to being in a group of nine: my family," Barrett said, telling the audience that in addition to federal judge, she wears other hats: carpool driver, birthday party planner and, recently, teacher, as her children attend school remotely because of the pandemic.

Barrett also seemed to acknowledge the charged political moment she's stepping into, saying she has "no illusions that the road ahead for me will be easy."

"The president has nominated me to serve on the United States Supreme Court, and that institution belongs to all of us. If confirmed, I would not assume that role for the sake of those in my own circle and certainly not for my own sake. I would assume this role to serve you. I would discharge the judicial oath, which requires me to administer justice without respect to persons, do equal right to the poor and rich, and faithfully and impartially discharge my duties under the United States Constitution."

Trump appointed Barrett to the 7th U.S. Circuit Court of Appeals in Chicago just three years ago. Before that, she taught law at the University of Notre Dame for 15 years and had clerked for Scalia, widely seen by conservatives as a legal legend.

Barrett is admired by conservatives for her positions on abortion rights and the Affordable Care Act, also known as Obamacare. A devout Catholic, she is also a favorite of religious conservatives. At 48, Barrett would be the youngest justice on the Supreme Court if confirmed, allowing her to potentially shape American law and society for generations.

Within hours of Ginsburg's death last Friday, Senate Majority Leader Mitch McConnell, R-Ky., pledged to bring Trump's nominee for a vote on the Senate floor. The president has made clear he wants his nominee approved by Election Day, predicting that the results of the presidential election may end up in front of the Supreme Court.

Democrats, including presidential nominee Joe Biden, say whoever wins in November should pick the next justice, citing McConnell's successful effort in 2016 to block President Barack Obama's nominee for the Supreme Court, Merrick Garland, about eight months before the election. Now, Trump is setting up a Supreme Court fight just over a month before the 2020 election.

While Republican Sens. Susan Collins of Maine and Lisa Murkowski of Alaska have said they do not support a vote on a nominee before the election, other Republican senators considered to be potential swing votes, including Sen. Mitt Romney of Utah, announced they would support moving forward with a Supreme Court confirmation.

That support likely gives Trump the votes he will need to get his nominee on the bench. Still, Capitol Hill is bracing for a high-stakes political battle in the weeks and even days leading up to the election, spilling onto the campaign trail both in the presidential contest and for several tight Senate races.

A Senate Republican aide told NPR on Saturday that confirmation hearings are set to begin on Oct. 12 and last four days.

The Democrats have already been framing the nomination as a battle to preserve health care — with a major challenge to the Affordable Care Act on the court's schedule this fall — while Republicans see abortion as a salient issue to bolster support for Trump's filling the seat as soon as possible.

Trump began promoting his forthcoming nomination the day after the court announced Ginsburg had died. During a rally in North Carolina last Saturday night, Trump promised to pick a woman for the seat, a nod to Ginsburg's lifelong efforts to promote the equality of women under the law.

This week, thousands of mourners lined up outside the Supreme Court where Ginsburg's casket lay in repose at the top of the court's marble steps. On Friday, Ginsburg lay in state inside the U.S. Capitol's Statuary Hall, the first woman and the first Jewish American to receive such an honor.

Ginsburg will be buried at Arlington Cemetery on Tuesday, following the Jewish holiday Yom Kippur.