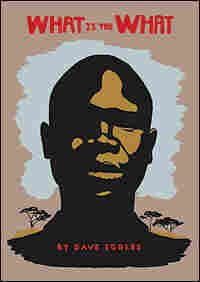 Ok, so I know I'm waaaay behind... but last night, I finished reading Dave Eggers' latest novel, What is the What. But, the book does come out in paperback next week, so maybe I'm just getting a jump on the renewed coverage? Anyway, it's absolutely incredible... one of those books that stays with you for a long time. My friend Kim finished it months ago, and it's still the fastest way to get her attention -- "wah wah wah wah ACHAK DENG wah wah" -- her head will whip around so fast her eyes go blurry. And now I know why. For those of you who haven't read it yet, What is the What is the story of Valentino Achak Deng, a Lost Boy of Sudan. He's told his story to Eggers, who presents it to us, embellished to flesh it out as a story of both one Lost Boy, Achak, and as the story of the Lost Boys. It's a story worse than harrowing, but more rich than simply terrifying. There are beautiful moments of levity and warmth, coupled with the days -- nay, weeks and months and years -- darker than I could previously imagine. When I closed the book for the last time, my mind was swirling... and first thing this morning I searched NPR.org to see if we'd covered the book. I discovered this treasure -- an interview with Eggers and Valentino (aka Achak, and many other names I won't spoil), and am listening to Valentino's voice as I type now. It's a fitting coda to my hours spent in his world, and I hope you enjoy it too*.

*Beware... there's a bit of a spoiler at the end. If you want to avoid it, stop listening to the file when Eggers finishes speaking, at 8:18.