Accessibility links
Maps as Fascinating Book : Blog Of The Nation Maps are so much more than geography, they're a time machine that show us what the world, and the people in it, looked like. 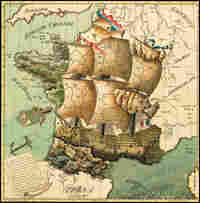 A map from the Cartographia collection. Source: Reprinted with permission of the Library of Congress hide caption

toggle caption
Source: Reprinted with permission of the Library of Congress

The book, Cartographia, is a stunning collection of maps, and the stories they tell about the world and the people in it. We'll hear from Vincent Virga, the picture editor who put the collection together, on the radio today. And he also had an interesting story to tell on the blog:

I am a visual person. I think in pictures. If I need my glasses or my keys, I show myself where they are in my mind's eye; I don't tell myself where they are in words. Are you a visual or a verbal person? (Where are your keys right now?) Like me and all of you visual people, maps archive information in pictures. Most historians of all stripes are verbal people, word people with little or no visual literacy. Hence, most history books never use maps as cultural landscapes or social documents; if they do include maps they are usually charts or graphs. Being incapable of envisioning maps as visual metaphors, traditional historians have narrowed map studies for centuries to Who, When, How, and Where the maps were made. About thirty years ago, visually gifted cartographic historians, such as the great J.B Harley, began to ask Why maps were made, what attitudes and ideologies were the mapmakers expressing? A new nature of maps was revealed. Mapmakers were seen as translating ideas into graphic form. Put in historical and cultural context, maps have intriguing stories to tell and each culture expresses itself in its own unique way. This is bliss for a person like me who thinks in pictures! This is the life-enhancing, eye-opening vision of mapping human culture that is Cartographia.