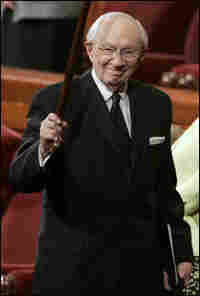 When the newswire announcing the death of Church of Jesus Christ of Latter-day Saints president and prophet Gordon B. Hinckley buzzed into my blackberry, I mentioned it to my boyfriend, who grew up in the Mormon church, and wondered who the new head would be. His immediate response? "Thomas Monson." He's right. According to tradition, the former leader's second-in-command assumes the church presidency, but only after the leadership gathers to pray on it. NPR's Howard Berkes will help us remember Hinckley, a man who changed the church dramatically during his tenure, and look ahead to Monson.