Accessibility links
Mix Tape Love : Blog Of The Nation Love and mix tapes are forever intertwined... What's your nomination for the Talk of the Nation Valentine's Mix Tape? 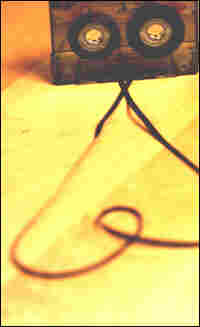 Wind up for the TOTN mix tape of love. Source: e.c. hide caption

Few things inspire as much passion as a mix tape. On the one hand, it's an artifact virtually guaranteed to arouse emotion in both creator and receiver. But on the other, the rules are absolutely unclear, though every serious compiler has her own gospel, inviolable and inarguable. True devotees of the mix can argue the minutiae for hours -- the best songs on a theme, the best format, the benefits of surprising the listener vs. keeping the flow, the most esoteric artist included... It's never-ending. I've been going through my old mix tapes recently in an effort to cull my belongings in advance of my planned move, and that combined with a request from a friend for my "Best of 2007" mix, which would be third in a series started in '05 if I'd actually made it, has the mix-itch agitated. Oh yeah -- and Valentine's Day. Love mixes can be both the most inspired and the most tortured in the game, and it's been awhile since I made one. So here's the challenge, BOTNers: help us compile the Talk of the Nation Valentine's Mix. And fear not, this isn't just for the lovers: We want all your best love songs, be they songs of absolute devotion, chance encounters, loves lost, scorned lovers, whatever. We want them all... and in tomorrow's first hour, we'll talk about them all and let you know how you can get the mix for yourself!