Accessibility links
Tiger's Still Got It : Blog Of The Nation In Rocco vs. Tiger... Tiger takes it, but barely.

Listen
Tiger's Still Got It

Tiger's Still Got It 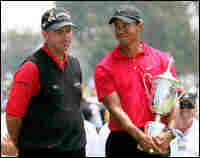 To me, saying Tiger Woods won't be a contender at fill-in-the-blank Open is like betting the sun won't set tonight: just plain nuts. But, then again, I don't know a whole lot about golf, so that isn't saying much... except, Carlos Monarrez did just that. In his column last week for the Detroit Free Press, he said what no one would, and he didn't mince words...

By now, you've probably heard how the weekend went down, how the unlikely Rocco Mediate took Tiger into golf-overtime: a full-on extra game to break the tie Tiger forced in the final round on Sunday. It even went into sudden-death on Monday! Doesn't sound like the golf I (sort-of) know, which is why Carlos joins us today with the full story... and to eat a little crow.