Accessibility links
Car Vs. Cyclist : Blog Of The Nation Riding your bike to work can be more divisive than you might think. 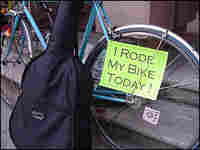 What about you? Did you bike to work? Source: BikePortland.org hide caption

This may be terribly un-NPR of me, but I just can't bike to work. D.C. is a tough city to navigate under any circumstance, and even after 7 years here, I just can't get my head around doing so on two wheels. I've seen too many bus drivers fail to notice cyclists, too many cars in designated bike lanes, and too many accidents at the intersection right outside my window. But, as I'm sure is true for many, my feelings about bicyclers are complicated. While, ideologically, my sympathies lie mostly with them, there are few words adequate to describe the rage I feel when "Share the Road"-ers blatantly disregard the rules of said road, riding opposite traffic, through red lights, and on what I adamantly assert (in my head, anyway) are sidewalks. No group in this scenario -- walkers, drivers, cyclists -- is blameless, and I think we all make a lot of assumptions. For example, I always assumed the cyclists were doing something, intentionally or not, that's pretty good for the environment. You know what? Even that rationale's got some doubters. But with gas prices still insane (that's a technical term), it'd be pretty hard to argue that cycling doesn't make economic sense for the rider, even if it doesn't in the big picture. So as the numbers of two-wheelers grow, so does the interest in making our cities more bike-friendly for commuters. Where do you stand -- or sit -- in the intersection of cars, bikes, and walkers... or of fuel economy, safety, and the environment?