Accessibility links
Confidence In The Con : Blog Of The Nation Ever been taken in by a confidence game? The art of the con...

Listen
Confidence In The Con

Confidence In The Con 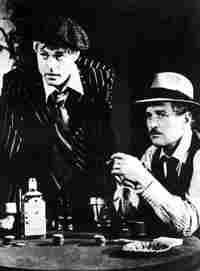 The confidence scheme certainly seems like an American obesession -- the golden age of grift came courtesy of the Jazz Age -- and boy does Hollywood love a huckster. I suppose then, it's no surprise that the latest con to hit the papers is a guy proclaiming himself American Royalty: the peculiar case of Clark Rockefeller, nee Christopher Chichester, nee -- I'm not kidding -- Christian Karl Gerhartsreiter. For the whole story, read the Boston Globe's excellent reporting -- it reads like fiction. What's most fascinating to me is how many people believed him -- state senators and Upper East Side art dealers -- everybody wanted to believe him. These days, the confidence game is less an art, than a science; a race to see how many people will be trapped by a mass mailing signed by a "Nigerian Prince." It makes me nostalgic for the days of Harold Hill -- at least back then, a con cared about the trouble in River City.