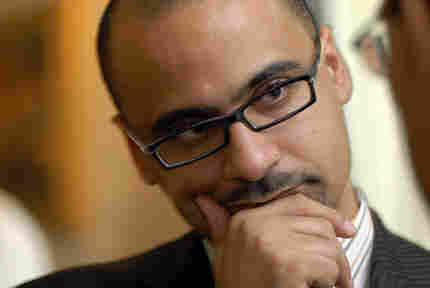 Before the Democratic and Republican conventions in Denver and St. Paul, respectively, we had a big brainstorming session. This was the starter question: "If you could talk to anyone about what this election means -- to him or her, the country, the world, and history -- what person would you choose?"

We filled a big dry-erase board with names. For better or worse, the conventions lasted [only] two weeks, which left us with [only] eight spots to fill, eight interviews to do.

By continuing the series, we hope to talk to some of our dream guests, the artists, writers, politicians, philosophers, theologians and thinkers who have really busy schedules and are hard to get. Junot Diaz is one of them. Ever since he won the Pulitzer Prize for fiction, for The Brief Wondrous Life of Oscar Wao, he has been a busy man, traveling widely -- and picking up accolades everywhere he goes.

Diaz is in town today. (A paperback version of his book has been published, and he's embarking on another book tour.) He'll join us in the Newseum, to tell us what "This American Moment" means to him. If you haven't chimed in yet, what does it mean to you?