Accessibility links
Anatomy Of The Elephant : Blog Of The Nation A few of our favorite -- Republican -- things. A glossary of terms for the elephants.

Anatomy Of The Elephant

Anatomy Of The Elephant 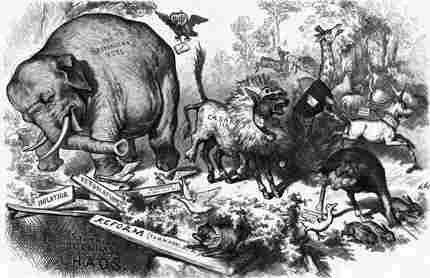 As is the way with many political power shifts, the main topic threading throughout media outlets from Europe to Kentucky, is what it all means for the party that's lost power -- in this case, that old party that isn't feeling so grand after Tuesday's losses: the Republicans. Today of course, we're talking about the future of that party -- left, right, center, Palin -- so I thought I'd do up a little cheat sheet for y'all (c'mon, you wanted to know why on earth an elephant, didn't you?). Here's today's glossary -- not, by any means comprehensive. Please add your own below.

GOP, or Grand Old Party: This traditional nickname for the Republican Party didn't used to stand for "grand old party," but "gallant old party." Use of the term has been around since 1876 (!), though some newspapers claim that most people don't know what it means. I've noticed when I'm editing Neal that he'll often take it out -- exactly for that reason.

Elephant: The traditional symbol for the Republican Party -- dating back to 1874 when Thomas Nast began using it in his cartoons (you can see the first usage above). That particular cartoon grew out of mid-term elections -- that's right, in 1874. Democrats tried to scare voters into thinking President Ulysses S. Grant would seek to run for a third term. Nast, a cartoonist for Harper's Weekly, depicted a Democratic jackass (yep -- a donkey) trying to scare a Republican elephant. It stuck. (I think the GOP got the better mascot, thoughts?)

Fiscal conservatism : Just what it sounds like -- part of the ideology that made Ronald Reagan a favorite of the Republicans, and some Democrats (hence: Reagan Democrats). It's your basic less governmental spending, lower federal debt, low taxes conservatism. You'll hear a lot of fiscal conservatives talking about smaller government, and fewer earmarks (remember McCain's stump line -- "I will make them famous, you will know their names!" He's talking pork.)

Red state: Bet you didn't know this one -- this term is a baby! In 2000, the late Tim Russert (according to the Washington Post) coined the red/blue state terms to describe the cultural divide. Since then -- Republicans have been red and Dems have been blue (seriously blue for about eight years, actually.)

Compassionate conservatism: Here's an oldie but a goodie! This one's a sort of conservative blend -- a little milder than social and fiscal brews -- popularized by the second Bush. Basically, conservative technique to help humanity and improve society.

Republicans, Party of Lincoln: Here's a great tidbit: the 1854 creation of the Republican Party was based on a very progressive vision. Anti-slavery (opposing the Kansas-Nebraska act which would have expanded the vile trade to Kansas), an emphasis on higher education, banking, railroads, and industry. The party nominated Abe Lincoln, who became president in 1860, and the rest is history.

Neoconservatism: The Kristol Konservatism! Irving Kristol always referred to neocons as liberals "mugged by reality," i.e. people who became conservative after observing what they thought were failures of liberal policies. it has become more famous for its association with George W. Bush's aggressive foreign policy -- the architects of the Iraq War, Richard Perle, Dick Cheney, and Paul Wolfowitz. Neocons and fiscal conservatives clash on the role of government quite a bit.