Accessibility links
April 7th Show : Blog Of The Nation In the first hour of Talk of the Nation, solving the national debt crisis, and a Q&A on a possible government shutdown. In the second hour, the definitive Malcolm X, and Glenn Beck leaving FOX News. 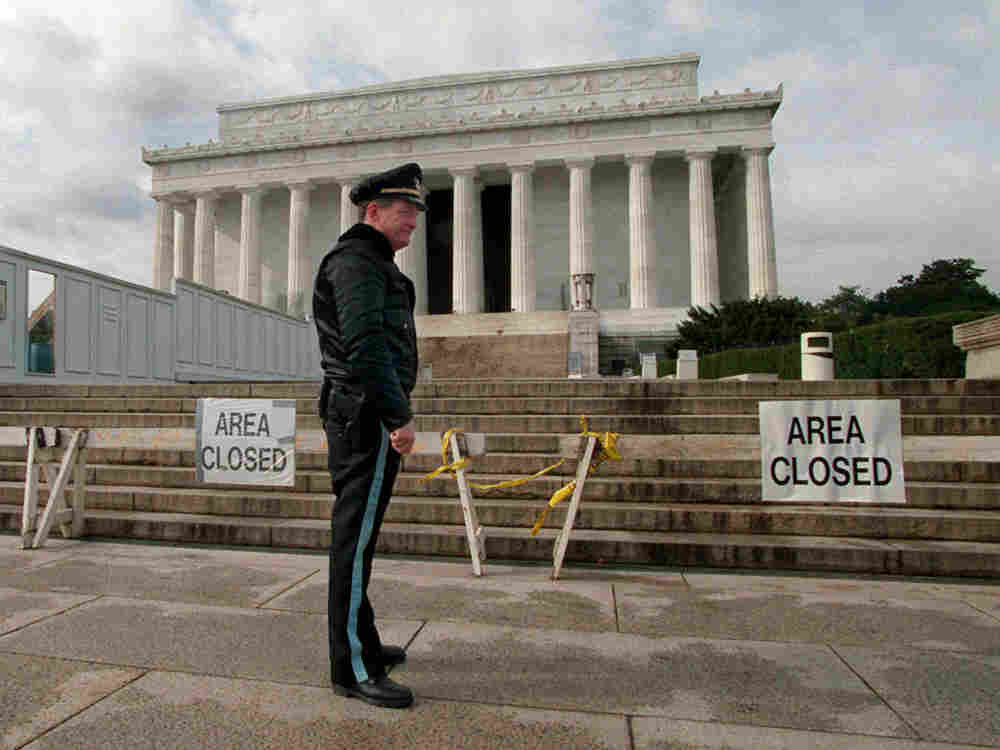 U.S. Park Service Police Officer P.G. Carroll stood in front of closed signs at the Lincoln Memorial in Washington Wednesday, Nov. 15, 1995, as the partial shutdown of the federal government continued. Hundreds of thousands of government workers were laid off as President Clinton and the Republican Congress remained at odds over budget priorities. Charles Tasnadi/AP hide caption

Solving The Debt Crisis
The head of the House budget committee released his plan this week to cut about $5 trillion dollars in federal spending over ten years. All week, Talk of the Nation has been focusing on the long term debt. Steve Bell, a centrist, Alison Acosta Fraser, with the conservative Heritage Foundation, and Robert Greenstein, at the liberal Center on Budget and Policy Priorities, each offered their ideas on how to reign in the massive federal debt. Today host Neal Conan will focus on the politics of taming federal spending and debt with former Republican Senator Alan Simpson, a co-chair of President Obama's National Commission on Fiscal Responsibility and Reform, and North Dakota Democratic Senator Kent Conrad, the current chair of the Senate Budget Committee.

Government Shutdown Q&A
Congress and President Obama have until midnight Friday night to agree on a budget compromise or parts of the federal government will shut down. As many as 800,000 civilian workers would be furloughed with wide-ranging effects on services across the country. Military servicemembers will continue to work, but won't be paid until Congress approves a budget. Many tax refunds would be delayed, national parks would close and the Federal Housing Administration would stop processing loans. Host Neal Conan talks with NPR's Brian Naylor about what happens when the federal government shuts down.

The Definitive Malcolm X
Malcolm X was known by many names in his 39 years: born Malcolm Little, he picked up the nickname "Detroit Red" during his years of petty crime. In prison, his cellblock mates called him, "Satan." It was during his time in prison that he began the process of reinvention that led him to become what his followers called "the high priest of the black social revolution." Author and scholar Manning Marable dedicated much of his career to uncovering provocative new details about the life and death of Malcolm's X, and his Life of Reinvention. Marable died just last week, days before his biography was published. Host Neal Conan talks with Wendy Wolf, the editor of the book, and Georgetown University professor and public radio host Michael Eric Dyson about Marable's work and the light it sheds on the legacy of Malcolm X.

Glenn Beck Leaves Fox News
Glenn Beck and Fox News have called it quits. Beck announced he is leaving his daily talk show later this year when his contract runs out. Both parties call it a mutual agreement amid a decline in ratings, drop in advertising dollars and speculation of a rocky relationship between the host and the network. Host Neal Conan talks with NPR media correspondent David Folkenflik about the impending departure and the new world of celebrity brands.