Accessibility links
March 12th: What's On Today's Show : Blog Of The Nation In the first hour of Talk of the Nation, the changing role of aid workers in conflict zones, and criminal punishment for excess violence in sports. In the second hour, disparities in school discipline, and why some songs get stuck in our heads. 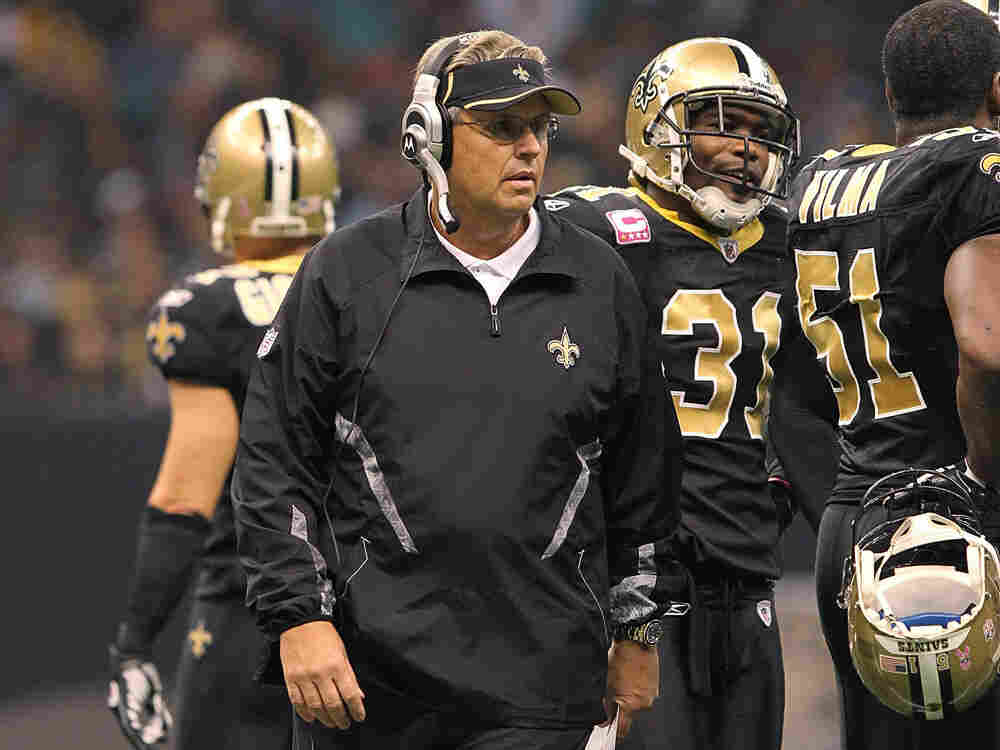 Defensive coordinator Gregg Williams of the New Orleans Saints talks to the defense during the game against the Pittsburgh Steelers at the Louisiana Superdome on October 31, 2010 in New Orleans, Louisiana. On today's Opinion Page, attorney Eldon Ham argues that athletes should face criminal charges for malicious attacks on the playing field. Matthew Sharpe/Getty Images hide caption

The Changing Role Of Aid Workers
In Afghanistan and other conflict zones, the first people on the ground are often the military, followed by diplomats, private contractors and journalists. Close on their heels, in many cases, are aid workers: People who work for private organizations and strive to remain fiercely impartial in some of the most dangerous places on Earth. They're called upon to help with everything from securing clean water to drafting a constitution. And the job is getting more dangerous: More than 200 aid workers were killed in 2010. They're often unwelcome in some countries, and in other situations they're mistaken for the military. Guest host John Donvan will speak with Oxfam America's Mike Delaney and the International Rescue Committee's Michael Kocher about what's changing in international aid work.

Handcuffs For Hard Hits?
Several coaches apologized after the NFL uncovered allegations that some two dozen players for the New Orleans Saints took part in a pay-for-hits program that paid bounties for knocking specific players out of games. The program violated league rules, and those involved likely face fines or suspensions, but lawyer Eldon Ham argues that doesn't go far enough. In an op-ed for The New York Times, he says those involved should face criminal charges, "There is simply no reason football and other sports ... should any longer treat malicious on-field actions as beyond criminal prosecution." Ham joins guest host John Donvan on the Opinion Page.

Black Students Face More Discipline Than Others
From 2009 to 2010, black students across the country were three and a half times more likely to be suspended or expelled than white students. This new data comes from a national survey by the Department of Education of more than 72,000 schools serving 85 percent of American students. While the reasons for the disparities are unclear, many argue that harsher punishments effectively push many black and Latino students out of schools and into the criminal justice system. Guest host John Donvan talks with Russlynn Ali, Assistant Secretary for Civil Rights at the U.S. Department of Education, and Matt Cregor, of the NAACP Legal Defense and Educational Fund, about the consequences of disparities in discipline.

Why Some Songs Get Stuck In Your Head
Chances are, you've fallen victim to earworms — pesky songs or melodies that get stuck in your head and just won't get out. Research suggests that there are psychological reasons why some songs are more likely to stick, including memory triggers, emotional states, and even stress. Some researchers hope to better understand why this happens and figure out what, if anything, music memory can teach psychologists about how to treat patients dealing with memory loss. Guest host John Donvan speaks with psychologist Vicky Williamson about the reasons some songs get stuck in our heads and the implications that has for understanding human memory.