Accessibility links
April 3rd: What's On Today's Show : Blog Of The Nation In the first hour of Talk of the Nation, the balance of power between retailer and consumer, and journalist Isabel Wilkerson explains the history of racial violence in Florida. In the second hour, media coverage of the Trayvon Martin case, and measuring home runs in baseball. 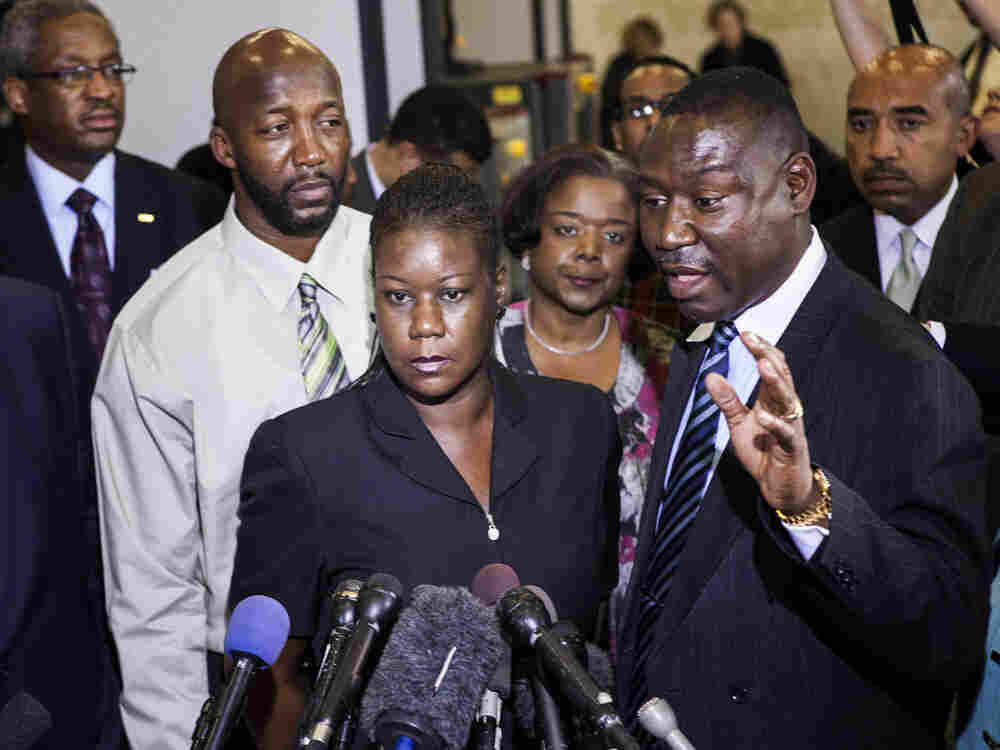 Sybrina Fulton (C) and Tracy Martin (L), parents of Trayvon Martin, listen while their friend and lawyer Benjamin Crump speaks to the press after a forum of Democratic members of the House Judiciary Committee on Capitol Hill March 27, 2012 in Washington, DC. In the second hour, we'll talk about how the news media is covering the Trayvon Martin case. Brendan Smialowski/AFP/Getty Images hide caption

The Balance Of Power In Retail
Shopping apps and retailers' websites have given consumers the power to compare prices, read product reviews and shop on the go, leaving many brick-and-mortar stores to function as little more than showrooms. The smart shopper can now walk into a shop and ask a seller to match the lowest price online, armed with proof. And if the buyer's not satisfied, online retailers are ready to ship, often for free. Host Neal Conan talks with Stephanie Clifford, business reporter for The New York Times, and Paco Underhill, author of Why We Buy: The Science of Shopping about how retail stores are responding to the shift in power to the consumer.

Trayvon's Killing And Florida's Tragic Past'
The killing of Trayvon Martin is just one in a long series of racially-tinged acts of violence in Florida, argues Pulitzer-prize winning journalist Isabel Wilkerson. Wilkerson, author of The Warmth of Other Suns: The Epic Story of America's Great Migration recently recounted nearly a century of racial violence in the state for CNN.com in "Trayvon's killing and Florida's tragic past." Wilkerson joins host Neal Conan to explain how Martin's killing may not have been, historically speaking, an isolated incident at all.

Media Coverage Of The Trayvon Martin Case
The death of Trayvon Martin, an unarmed teen who was shot and killed by neighborhood watch volunteer George Zimmerman, has dominated the airwaves and headlines for weeks. According to the Pew Research Center, the death of Trayvon Martin is the most closely-followed news story in the United States. Much of the coverage is focused not on the case itself, but the narrative constructed by the news media. Host Neal Conan talks with New York Times columnist David Carr and Ta-Nehisi Coates, senior editor at The Atlantic. Conan also talks with Amy Mitchell, deputy director of the PEW Research Center's Project for Excellence in Journalism.

Baseball's Biggest Home Run Hits
The mammoth home run Washington Nationals outfielder Jayson Werth smashed out of Space Coast Stadium last week had sports writers salivating and baseball lovers breaking out the tape measure to figure out just how far the ball had gone — a practice that started back in 1953 with Mickey Mantle's historic 565 foot hit. Sports writer Jane Leavy has traced the origin of the tape measure hit and notes that the term originated because the existing lexicon wasn't big enough to capture Mantle's power. Host Neal Conan talks with Leavy about the biggest hits in baseball.