Rather than sending you on a hyperlink hunt, I'm going to recap a continuing blog saga.

Talking Plants reader Luanne Stehno lives in the Denver 'burb of Arvada. Several years ago, she entered a city-sponsored contest and won a xeriscape garden. This past summer, someone complained that Luanne's mass planting of blue grama grass was way too high.

And indeed it was, according to Arvada city code, which places a height limit of 12 inches on "grass and weeds". And 12 inches is typically as high as blue grama gets, according to the city that sanctioned its planting.

For one, Arvada had a particularly wet growing season, resulting in exuberant grass growth.

For another, plants can't read.

Maria VanderKolk, assistant to the Arvada's city manager, sent Talking Plants a very thorough letter detailing Arvada's side of the story. We thank her for pointing out that Arvada "wholeheartedly supports lawns planted with drought-tolerant varieties," adding, "we also believe those lawns should be maintained."

Call me wild and crazy but this whole affair seems a brilliant opportunity for Arvada -- a city that prides itself on being named "Colorado Energy Champion" of 2006 -- to ditch its landscape code in favor of one that addresses a more 21st century aesthetic and resource awareness. Already, as Ms. VanderKolk points out, Arvada shows more flexibility than nearby Denver, whose tolerance for seas of Colorado's state grass stops at 6 inches.

No doubt changing city code will be an enormous hassle; I don't underestimate the effort. But I'll bet lots of Arvadians will step up to the challenge. 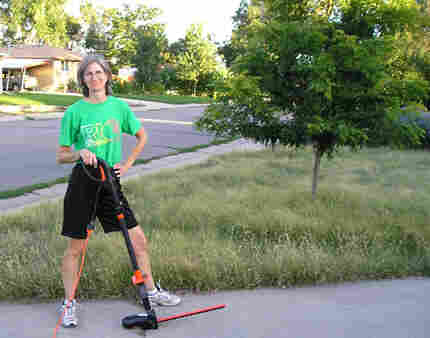 Under loud protest, Luanne Stehno has since trimmed her grama grass meadow. "We have to be accepting of different-looking landscapes," she says. "This is what the future is going to be." Courtesy Luanne Stehno hide caption