Accessibility links
Take This Lawn and Kill It! : Talking Plants Blog And now this, ripped from a private communique to Talking Plants:

Take This Lawn and Kill It!

Take This Lawn and Kill It!

And now this, ripped from a private communique to Talking Plants:

John Tynan and his wife Rene live in Tempe, Ariz., where the operative word is "drought". Being of reasonably common sense, they know better than to waste precious resources on maintaining a grass lawn.

However ... their preferred choice of landscape -- let's call it Postmodern Parched -- has offended their lushly-lawned neighbors, who evidentally reported the Tynans to the Tempe Taste Police.

Are you among the undesirables who've been warned about their ugly front yards? photo credit: John Tynan hide caption

Let's examine the evidence. First, the Tynans' front yard, featured below, at first glance not a particularly offensive sight, but that's clearly in the eye of the beholder. 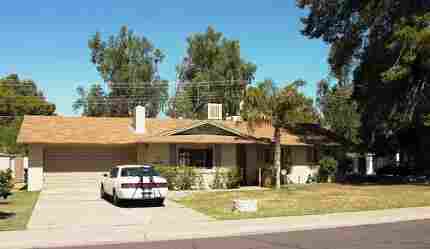 Postmodern Parched: the Tynan yard as it looked when the city busted them photo credit: John Tynan hide caption

Now let's look at the offended neighbor's yard, where someone clearly knocks his or herself out to have a "perfect" (also in the eyes of the beholder) lawn. 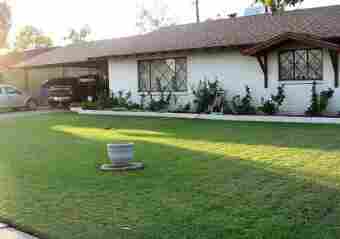 Talking about his next door neighbor's landscape, John Tynan says, "It's a beautiful lawn. But is it right for Arizona?" Hmmm. Me thinks he knows the answer. photo credit: John Tynan hide caption

I'll have an update soon on what John and Rene have done to maintain calm in Tempe. But theirs is not a new story. In fact, I was surprised these kinds of notices were still going out, particularly when no mess is apparent. So tell me: Has this happened to you?