Accessibility links
Rock Star Botanists : Talking Plants Blog As promised, you're about to meet Ken Wood. He's one of the so-called "rock star botanists" on the Hawaiian island of Kaua'i, associated with

Hear Ken Wood talk about collecting seed in the wild

Hear Ken Wood talk about collecting seed in the wild

As promised, you're about to meet Ken Wood. He's one of the so-called "rock star botanists" on the Hawaiian island of Kaua'i, associated with the National Tropical Botanical Garden.

Why rock star? Most likely because his exploits have become the stuff of legend, his relentless, daring feet (insert wink) in the wild decade after decade, in search of endangered Hawaiian and Pacific Islands plants. 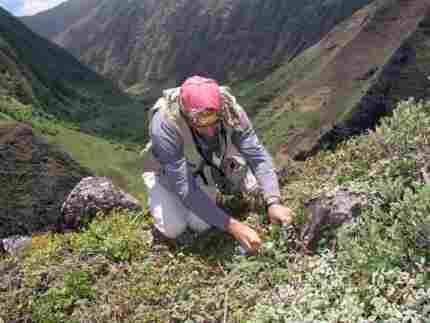 If you've got a hankering to find research biologist Ken Wood, you could do worse than scout for him around the Kalalau Valley on the island of Kaua'i, one of his favorite botanic haunts. photo credit: courtesy National Tropical Botanic Garden hide caption

Yet for all the risks he takes on his seemingly death-defying plant expeditions, Ken Wood is no pumped-up Indiana Jones. Consider his modest comments from the talk we had while hiking a ridge overlooking his beloved Kalalau Valley.

All through time, there've been very interesting field biologists, many out here in the Hawaiian Islands, and these naturalists, botanists and biologists were incredibly adventurous; the rigors and difficulties they encountered were intense and amazing. So I think we've a similar mindset.

As for describing that mindset, how's this for a swashbuckling answer:

It's often said, "Who am I, Where do I come from, Where am I going to." Well, the "who am I" part is not just my physical form but what I'm a part of. So that curiousity we have, that interest in understanding our relationship with earth and/or the universe, I think that's in us all. And once we start to tap into it and learn a little bit and open the first few pages of this incredible story, we're locked in there. And if you can make a living at it, then you're in for a really cool ride. 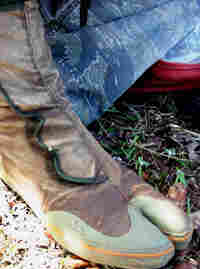 Ready to rock? Cool. How 'bout starting with an overview of the endangered plant crisis in Hawaii. Two good articles that feature Wood are Hanging by a Thread from Discover Magazine, and Paradise Lost? from Plant Talk.

And for you plant geeks, here's the blow-by-blow list of Hawaii's threatened and endangered plants, as well as an awesome overview of Hawaii's native flora.

A flora, I might add, all the richer because of guys like Ken Wood (I can already hear him protesting that he's just one piece of the conservation puzzle. Agreed). Not only has he kept countless plants from extinction, he is the decidedly bashful papa of a previously undescribed species. Get a look at this exquisite yellow Hibiscadelphus woodii. 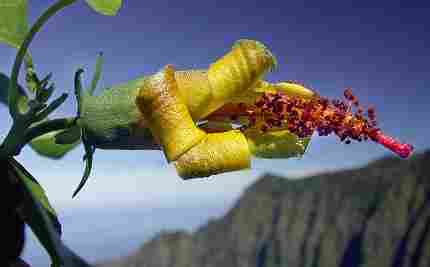 Pretty, isn't she? You can thank Ken Wood for getting her on the list of Hawaiian native flora. photo credit: Ken Wood hide caption