Accessibility links
Hawaii's Prettiest Pests : Talking Plants Blog OK all you botanical xenophobes (and I mean that in the nicest possible way)...

OK all you botanical xenophobes (and I mean that in the nicest possible way)...

As a preview to a Morning Edition series coming to a public radio station hear you, Talking Plants is taking a sneak peek at the plant pests of HAWAI'I. I figure some of you are headed there in the next few months, so this may be my best chance to pack another agenda into your luggage. 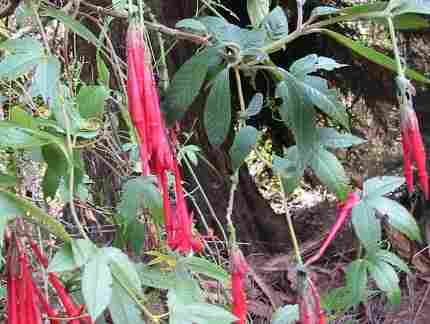 One of the prettiest pests on Kaua'i is the so-called lady's eardrops, Fuchsia boliviana, which started showing up in the 1960's and has now made it onto Hawaii's list of Most Invasive Horticultural Plants. Given that it likes life in moist forests, I'd say it's found its niche. photo credit: Ketzel Levine hide caption

Folks who visit Hawai'i (and we are many in the Pacific NW) often come back raving about the state's incredible flora. And sure, it's pretty. But most of what people rave about are introduced invasives that have gone hog wild. 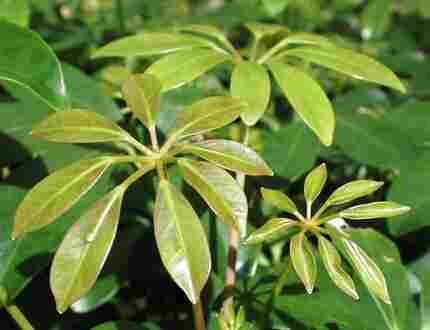 When I first looked up into a lush, green Kaua'i hillside, I was overwhelmed by the plant with the large, glossy leaves. Overwhelmed turns out to be how I'd now describe what schefflera has done to scads of the islands. photo credit:Scott Kinmartin hide caption

Many of the "Hawaiian" plants that turn heads -- the bold yellow ginger, the crimson African tulip trees, the multi-colored lantana -- are not merely non-native, they are trouble. And that includes everyone's favorite houseplant, the schefflera, a greedy plant also known as the octopus tree that has undoubtedly snatched a few extra acres of Kaua'i since you first started reading this post.

"So what's an apolitical fun-loving tourist supposed to do about all this?" you may ask. Support thems that give a damn, I answer. Dig deep when you visit Hawaii's botanic gardens and arboreta and leave a generous donation, 'cause it ain't cheap to keep paradise under control. 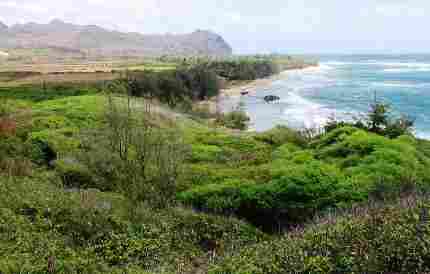 Behold the old axiom, beauty's in the eye of the beholder. What does it do to your perception of the Kaua'i coastline once I tell you this lush green foliage is all invasive flora? photo credit: Ketzel Levine, NPR hide caption