Accessibility links
The Little Green Orchid That Could : Talking Plants Blog On behalf of all your chlorophyllic friends here at Talking Plants, Happy New Year!

The Little Green Orchid That Could

The Little Green Orchid That Could

On behalf of all your chlorophyllic friends here at Talking Plants, Happy New Year!

Now I don't mean to twist your arm, but what I'm going to tell you about field botanist Steve Perlman and his search for Platanthera holochila is likely to make a whole lot more sense if you listen to the Morning Edition feature. 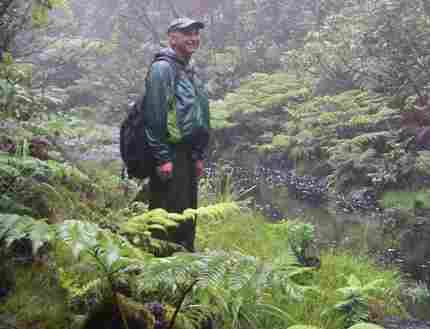 It was a habitat kind of day when Steve Perlman led our merry band of plant hunters through the Alaka'i Swamp on Kaua'i, just a dozen miles from Mount Wai'ale'ale, the second wettest place on earth. Our quarry: the fringed orchid. photo credit: David Bender, National Tropical Botanical Garden hide caption

It wasn't a very big plant, maybe 20 inches high. The chances of spotting it were absolutely nil. But Steve Perlman of the National Tropical Botanical Garden had seen this rare orchid years ago, before it was dwarfed by knee-high shrubs. So it wasn't entirely miraculous — but it was pretty damn impressive — when he found it growing the middle of a wind-swept, fogged-in swamp.

His timing was perfect; the orchid was ripe for picking. So he carefully removed a couple of pregnant pods for safekeeping, each filled with hundreds of dust-sized seeds. 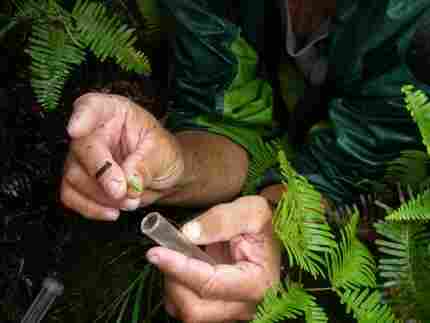 An ancient plant finds its future in the hands of men like Steve Perlman, who is shown here collecting seed from the fringed orchid. The next day this vial was winging its way to Illinois College where the seeds would be propagated. photo credit: David Bender, NTBG hide caption

This fringed orchid was the last of its kind on Kaua'i, and previous attempts to propagate it had failed. Since there could be no certainty that the orchid would live to see another September, the seeds Perlman was collecting this day were crucial to its survival.

One of the main reasons this particular orchid survived was because the enormous bog it was growing in was pig-proof. No lie. Hawaii's wild pigs are like living rototillers; one of the only effective defenses against them is some very serious fencing. 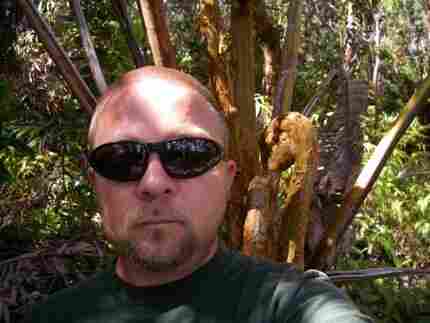 Not an ounce of mean in this man, honest. But a lot of talent. A debt of gratitude to botanist Dave Bender for his many great shots, including this seriously macho self-portrait with fern frond. photo credit: David Bender, NTBG hide caption

The next day, Perlman shipped this vial of seed pods to orchid specialist Larry Zettler, professor of biology at Illinois College. (Think: Larry, Larry, he's our man, if he can't do it, NO ONE CAN).

And now, through the magic of radio, you can Be There! when he gets the package.

About six weeks after receiving the little guys, Zettler e-mailed Perlman with good news, saying, "in a nutshell, this has not been an easy orchid to work with, but I am much more optimistic." I wrote to Zettler just the other day. Here's his response:

Hi Ketzel. We sowed the seeds that Steve sent us and they are in incubation. At last check, the embryos appeared OK. Platanthera species in general take considerable time in vitro, especially without fungi, but I'm becoming more convinced that this should be our option with this extremely fastidious species ... I find it ironic that my research with fungi may be taking a back seat with this species in favor of the asymbiotic technique which I had little faith in for the terrestrials. But that's how science sometimes works.

In other words, after intensive work growing terrestrial (ground) orchids in different fungi typically associated with the plant in the wild, Zettler's coming to the conclusion that he might have better luck not using any fungi at all. His findings seem to be consistent with a recent breakthrough in orchid growing at the Atlanta Botanical Garden (beware annoying little "chirps" at this site!). 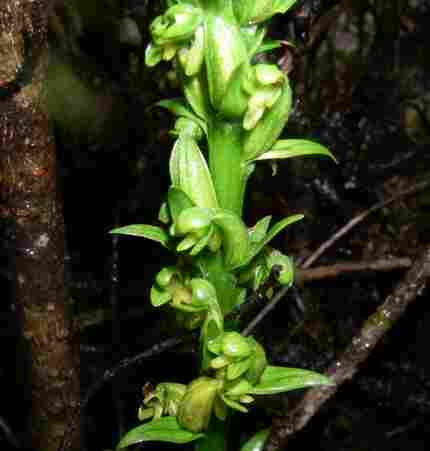 I have to admit that despite the looks of this, um, shall we say underwhelming orchid, finding the little sucker made for one of those all-time perfect days. photo credit: David Bender, NTBG hide caption

So will the little green orchid that could ever grown on Kaua'i again? Chances are pretty damn good, given that there's not a more delicious spot in the world to set down roots if your idea of a very good time is relentless wet, muck and rain. 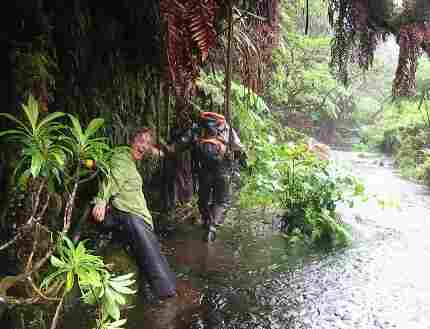