Accessibility links
More from the Sinkhole : Talking Plants Blog Here's the plant, here's the sinkhole, look inside and there's the people...

More from the Sinkhole

More from the Sinkhole

First up, let's take a look at Prichardia aylmer-robinsonii, a species of the lo'ulu palm that David and Lida Pigott Burney planted in "their" sinkhole. The plant is named after the family that currently owns the island of Ni'ihau, the only place this species is known to grow in the wild. 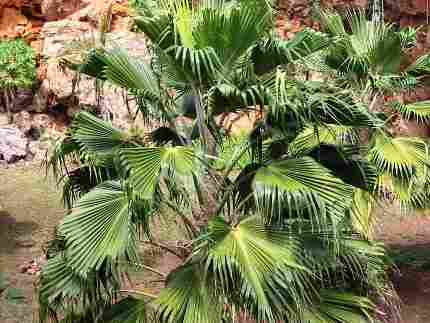 This baby has grown almost 30 ft in three years, happy to be home again after give or take a thousand years. photo credit: Ketzel Levine, NPR hide caption

Alas, the palm is no "missing link" as one of our delightfully optimistic TP members suggested; at least no more a link than any other plant in the chain. But seeing it restored in the Makauwahi Cave sinkhole does feels like an Indiana Jones moment of discovery, particularly if you stumble across it as you're walking the landscape above. I mean suddenly YIKES! there's an eight-story drop into this promised land. 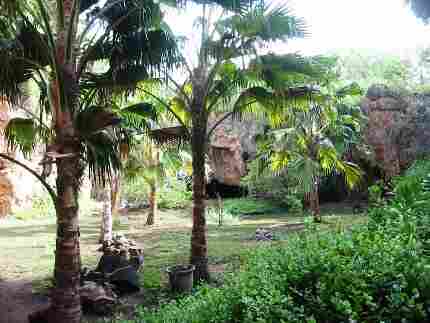 Here are the palms in context. I chose not to crop out the pots, etc., because this is a working conservation site, but once you're there, you'll have no trouble transporting yourself to a very pre-plastic (more like a Pleistocene) place and time. (Ahem, that's a joke; the sinkhole's only 10,000 yrs old). photo credit: Ketzel Levine, NPR hide caption