She likes to be called Rosario. Her full family name is nearly a dozen syllables long.

She lives as simply as a human being could hope for and it isn't because she's lazy or unambitious. She is a woman born and bred in the Amazon, and whether it's fish from the river or fruit from the forest, she knows how to coax everything she needs out of the landscape. "The forest likes me," she says. "I look after its young."

Intrigued? You ain't heard nothing yet... 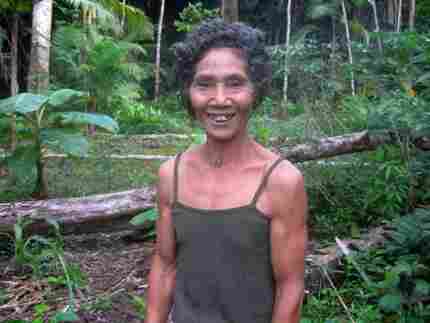 Standing in a forest that was bereft and abandoned before she and her family resurrected it, Rosario Costa Cabral is the mistress of all she surveys. In addition to collecting and replanting seedlings of the few old-growth trees that had, miraculously, escaped logging, this fifty-something woman is known among her peers for her uncanny ability to grow crops that should not tolerate river flooding even once, let alone twice a day. photo credit: Ketzel Levine hide caption

The permanent Rosario household includes her mischievous 82 year-old mother and her two 40-something brothers, but at any given time on any given hammock you'll find one or two of Rosario's stepchildren (the youngest is 20), near and distant relatives, and the odd ecologically-inclined academic.

Bar none (except perhaps his wife, Christine Padoch of the NYBG), the Rosario family favorite has got to be Miguel Pinedo-Vasquez of CERC, who often comes bearing gifts of California pistachio nuts. 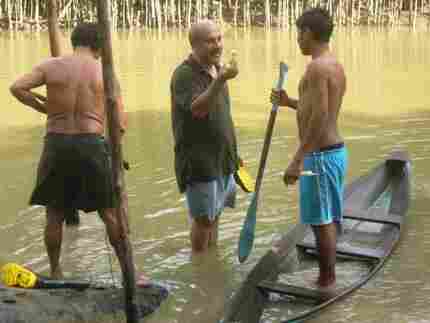 Lecturing (as academics are want to do) on the relative merits of sugar cane on a hot Amazonian day, Miguel Pinedo-Vasquez hangs out with Rosario's brother and stepson (that's the dreamy young Manuel on the right). The three are standing "in the road", if you will; this coffee-colored Amazon tributary -- the Foz de Mazagao -- is the only way to get around. And -- as I repeatedly reassured my mother -- it's extremely safe for bathing, hosting none of that legendary Amazon scary stuff (like those orifice-seeking fish). photo credit: Ketzel Levine, NPR hide caption

The Rosario family has lived on this land now since 1991. Everybody works extremely hard and the results are obvious, including the new house they were able to build out of their own lumber a year ago. The house is very open with high, high ceilings and can accommodate an untold number of hammocks; each room has a door and a single light bulb, but otherwise the house is largely empty, a blessing in such stifling heat.

Not surprisingly, though, the center of life is in the old kitchen, connected to the new house by a covered walkway. The kitchen, for my money, has the best view of any -- into that jungle of a backyard. 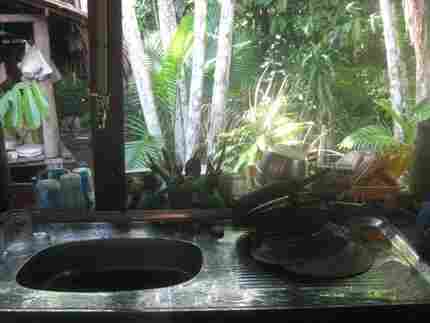 I could do dishes the rest of my life if I could stand at this sink (it's got the only faucet in the house) and stare off into the beckoning jungle. The array of bird songs that float in through this non-windowed space is enough to make grown women weep. photo credit: Ketzel Levine, NPR hide caption

So many pictures, so little time...which is why I invite you back tomorrow to enjoy the Amazon slide show we're busily putting together (how many shots of the piglet and the dog can you take?). In the meantime, I will leave you with the one image that's earned pride of place on my piano and I think you'll see why... 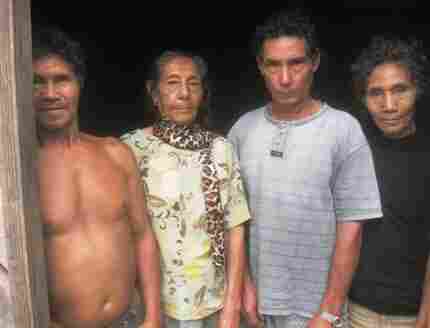 Introducing the Rosario family, from left to right: Alvino, Dona Raimunda, Joao and Rosario. Brazilians prefer first names only; in fact, that's how they're listed in the phone book. Think what Avedon might have done with this team! photo credit: Ketzel Levine, NPR hide caption

Tomorrow, the slide show. And a taste of acai...