Accessibility links
Pass the Vapors. This is One Hot Plant. : Talking Plants Blog It's an expensive habit if you don't have a friend with a greenhouse (I'm working on it), but many of us who crave sexy summer plants indulge in naughty delights like

Pass the Vapors. This is One Hot Plant.

Pass the Vapors. This is One Hot Plant.

It's an expensive habit if you don't have a friend with a greenhouse (I'm working on it), but many of us who crave sexy summer plants indulge in naughty delights like echeverias. It was while shopping for these fleshy opalescent beauties -- yet to be planted, pix to follow -- that I came across a spectacular plant now waving at me from my garden.

I know nothing, nada, about bromeliads. But I've got an impressive source. Burl Mostul is the proprietor of Rare Plant Research outside Oregon City, a mecca for all us poor plant slobs who cannot, like Burl, scour the world for jaw-dropping vegetation. Sigh. 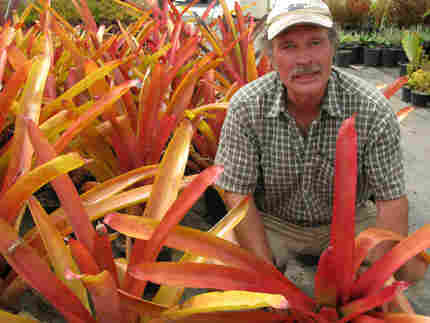 Here's Burl among his electrifying aechmea. I forget how many jewel-stuffed greenhouses he has, they're all pretty life-affirming, but none shimmer quite like this one. photo credit: Ketzel Levine, NPR hide caption

So here's the story Burl told me behind his orange/pink/mango-colored aechmea:

I went to Honolulu to go to the Lyon Arboretum plant sale. It's pretty big. And I met this little Japanese woman there, her name was Hatsumi Maertz, and she had some interesting bromeliads. And then I asked her if she had more at home. She said 'Sure!' and I went to this place in Pearl City.

When I got there, all you could see was bromeliads. Front and back. She was just an amazing collector. (Note: Burl didn't know at the time that Hatsumi Maertz was one of the founding members of the Hawaii Bromeliad Society).

Anyway, she had a lot of everything and this one stood out because of its color and size, more compact unlike the the more straggly ones. The normal A. mulfordii is green, but she'd gotten this cultivar from somebody else, you know how plants get passed around. So I rented a pick-up and bought at least 20 offsets from her, among a bunch of other plants.

I've had them about five years or so and I've only sold about 30 or 40 so far. This is the first year they're ready for sale. I have NEVER seen a color like this.

This is the part where I have to tell you that Burl doesn't do much mail order. But you can always drop him a line.