Accessibility links
The Platform Of The Garden Party : Talking Plants Blog Who says there's no platform for gardeners as the prevailing winds whip this country intro frenzy?

The Platform Of The Garden Party

The Platform Of The Garden Party

Who says there's no platform for gardeners as the prevailing winds whip this country intro frenzy?

Kitchen Gardeners International -- a non-profit founded in Maine 8 yrs ago by a gent named Roger Doiron -- has hooked up with eBay to sell virtual plots of the First Lawn. Why? After repeated readings of its press material, I see it's a fund-raising campaign for KGI programs, a call to turn front lawns into kitchen gardens, and a way to galvanize interest in convincing the next president to grow food on the underused, over-preened White House lawn. 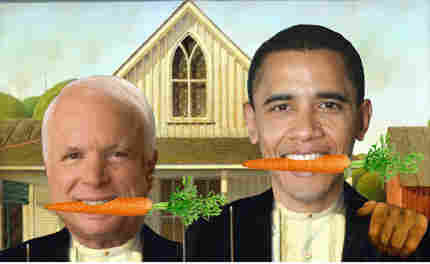 Roger Doiron, founder of the Maine-based Kitchen Gardeners International, is using this cheeky campaign to petition our next president for a quarter-acre garden on the White House lawn. photo credit: Eat The View hide caption

I fear the campaign suffers from confusion. We've got the virtual lawn sale, the Eat the View petition plus the challenge of interacting with eBay if that's not something you ordinarily do.

But at heart, no gardener will argue with KGI's mission statement, "to achieve greater levels of food self-reliance through the promotion of kitchen gardening, home-cooking, and sustainable local food systems".

Besides, if you're feeling disenfranchised as a green thumb voter, here's a place to put your muscle, your shovel and your vote.

As far as the precedent of growing veges on the big house's turf, the last time it was dug up and planted was in 1943, when victory gardener Eleanor Roosevelt grew carrots and beans. Here's a juicy article on the subject by the well-known victory gardener, Barbara Damrosch.

Check out a video after the jump...