Accessibility links
Exclusive Interview With Runaway Beagle : Talking Plants Blog In an exclusive interview with Ketzel Levine's runaway beagle who has just returned from four days on the road, a wannabe Brooke Gladstone of On The Media fame gets to the bottom of the story.

Hi, I'm Brooke Gladstone, host of On The Media. Ketzel has overdosed on so many M&M's during this last week of worry over Starlet, her beagle, that I suggested she pass out for the weekend and let me do the heavy lifting. My involvement's not all that far-fetched since I am a distant relative of said beagle. Ketzel is my second cousin and our grandmothers olev hashalom were sisters.

And while I too like dogs very much, having grown up with a memorable Great Dane named Eurydice, I don't exactly share my cousin's sometimes excessive allegiance if not over identification with animals. I'm hoping this detachment will play in my favor, as I ask a few questions that may help us fathom why Starlet Blue Levine left home. 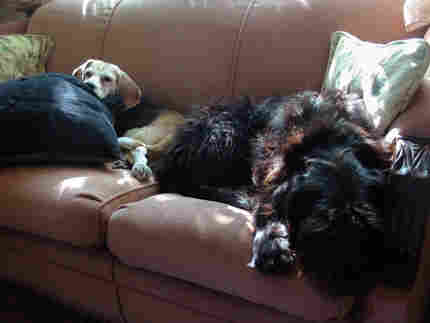 BG: Hi there Starlet, thanks for getting on the sofa.
SB: Are you here too? Are you eating something?
BG: Actually I wanted to talk to you about your recent disappearance. I understand that you took off Monday evening while Ketzel was out of the house.
SB: Does she have food in her pockets?
BG: In fact she does. Ketzel left and Zoe Mae opened the side door by putting her paws on the handle and jumping. Is that what you remember?
SB: Does she have a bowl outside?
BG: Yes, her bowl is outside. Is that where you were going?
SB: She smells but not much. But there is a smell. I remember now. And the smell gets closer and then it goes in a direction and I go in a direction.
BG: Right. Now from what we've pieced together from eyewitness reports, it seems you were following smells for about two hours before you were picked up. Do you remember where that was?
SB: BIG. SMELL. EVERYWHERE. I eat the smell.
BG: Exactly. You were eating garbage at the KFC on NE. MLK Blvd. Do you recall the people who picked you up and put you in their car?
SB: Are they here too? 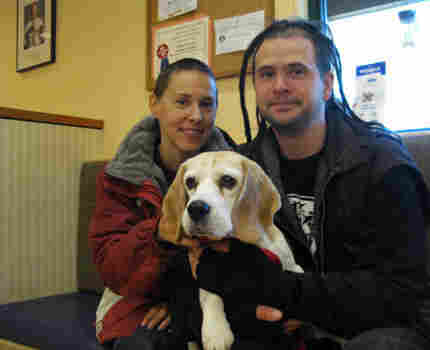 Joyce Crabbe and Mike Smith found Starlet at a KFC and brought her to their home. A few days later they took her to the vet's office to be scanned for a microchip, having worried that if they brought her to Animal Control the dog might be confiscated. Turned out Joyce and Mike used the same vet as Ketzel, and so! another victory for the kindness of strangers. photo credit: Ketzel Levine, NPR hide caption

BG: Do you recall anything about your four-day stay with the people named Joyce and Mike?
SB: Cat. Food. Drawers. Vomit.
BG: That's what they tell us, too, that you had issues with their cat and that you went through every cabinet in their kitchen. My guess is that you found food and ate it but that it didn't agree with you so you threw up. Does that ring a bell?
SB: Are you here? Do you have food in your pockets?
BG: As a matter of fact, I do have a little something, a blue peanut butter M&M I picked up off Ketzel's bedroom floor. But let's focus for a sec on you. Since coming home and hearing about your friends and family's sleepless nights, the hours of searching, the hundreds of lost dog posters and the paid ads in The Oregonian, what do you think you've learned about running away?
SB: (Stretches.)
BG: Starlet?
SB: (Grunts, circles and lands, curled. Looks at interviewer out of one eye.)
BG: Indeed, Starlet. From your mouth to God's ears: There is no place like home.
SB: (Snores).

A final word: It may be that no one understands Starlet better than the cat who watches her every move. So it's not all that surprising that literary agents are all a-twitter about rumors of a manuscript now making the rounds Watch these pages for more news about STUDIES IN ATTACHMENT DISORDER: My Life With A Beagle, by Lulah Levine.