Maples, rhododendron, stewartia and fall crocus; tree bark backlit by warm, benevolent light. When last we visited the Platt Garden, my favorite of the plant meccas in this gardenesque town, even its often modest vine maple was feeling very fall.

Go ahead, pinch yourself. It won't change a thing. Life in this landscape is merrily but a dream. 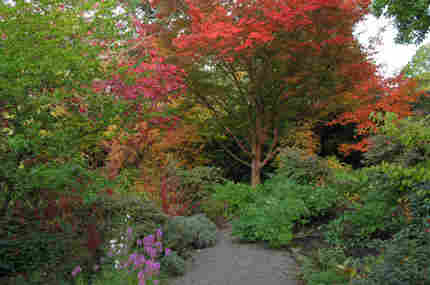 In this ever-changing corner of the garden, the centerpiece is the four-season Stewartia, a tree with great bark, late spring flowers, and delicious foliage. The purple flowers in the forefront are from the so-called obedient plant Physostegia virginiana a long-blooming East Coast native, and a bit behind and to the right are the naked red legs of a shrubby dogwood. photo credit: Ketzel Levine, NPR hide caption

Among the genera championed by the late Jane Platt -- a tradition continued by the very present David Platt -- is the misunderstood rhododendron, a plant that is so much more than the average American landscape would lead you to believe. Admittedly, we're able to grow a huge variety of the shrubs in the PNW that might not thrive elsewhere, but my guess is there are still quite a number of the straight species rhodies worth a shot. (Straight species refers to plants as they appear in the wild, before they've been hybridized and "improved".)

What all the Platt gardeners know -- there are three generations plus a Buddha-like one year old -- is that leaves can be just as astonishing as flowers. And while the garden does have ample rhodie flowers each spring, the best rhododendron foliage holds its ornamental own year-round. 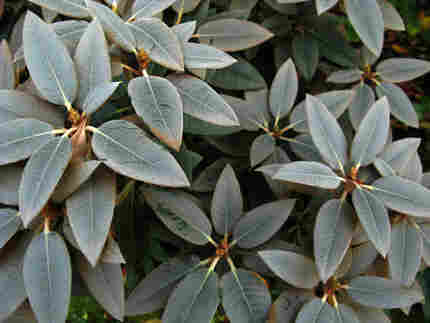 These silvery blue leaves are covered in what's known in rhodie language as "indumentum", a soft and thin layer that can be rubbed off (not a suggestion, just a description of its texture). This particular species is R. pachysanthum (I think; I'm awaiting confirmation), a showy sophisticated shrub which has matured to a 3.5' x 3.5' size. photo credit: Ketzel Levine, NPR hide caption

Many of us gardeners are collectors; I've got a couple of nice species rhodies myself. But the genius of the Platt Garden is the placement of its specimens with an eye towards the combination of texture, color and size.

Sounds like a simple formula but if you're a gardener you know how easy it is to get it not quite right (I don't believe any attempt in your own garden is wrong). If you're like me, you just let the plants do the talking and hope the conversation's interesting but in a garden this large you're talking cacophony if the leafy choir isn't in synch. 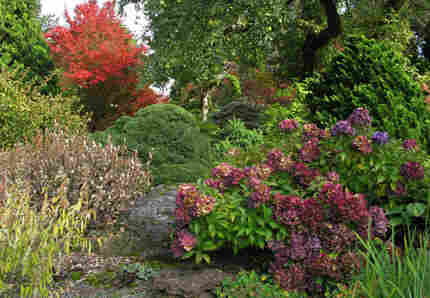 In this tapestry, the explosion of stewartia color (there are several in the garden) is now off to the left; the rich purple and plums of a mophead hydrangea dominate the bottom right. This is one small corner of the rock garden (see rock) which is loaded with miniature treasures in spring and lots of year-round evergreen muscle. photo credit: Ketzel Levine, NPR hide caption

Speaking of tapestries, you don't need a whole lot of material to create one. Not if you know how to play with plants. 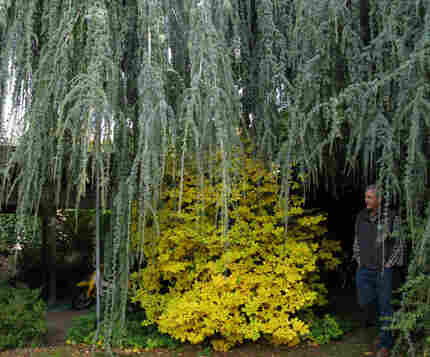 Here's the tableau up by the front of the house, featuring a spectacular weeping cedar (Cedrus atlantica 'Glauca Pendula' ) spilling over and around the golden foliage of the royal azalea (in truth a rhododendron), R. schlippenbachii. For scale, see that 6'2" Hunk'O'Man, my irresistible friend Kevin Teller. photo credit: Ketzel Levine hide caption

With any luck, we'll hear from one of the Platts shortly, if only to tell me that I've gotten a plant i.d. wrong. Kailla, Buddha-mother? David, slave to Flora? Hope you guys'll stop by!