In case this is the first you're reading of this, I'd like to confirm the rumor that I've been laid off.

Or, to put it as it suddenly occurs to me, That's no rumor! That's my life!

And on the outside chance you've just stumbled onto this year and a half old blog and want to catch up -- fast -- my name is Ketzel Levine, I'm a senior correspondent for NPR and my job ends January 12th, 2009.

I was given the news 36 hours ago and I've been on the proverbial roller coaster ride ever since. Earlier this morning, when I took my first shot at this blog item, I wrote something to the effect that my being rift was not personal, "it's just what it is." And that, wait for it, "I've been one lucky woman, why should it end now?"

What was she on? I could use some of that tonight, as I look over at the clock and see that in the last hour I've written three sentences and chewed my nails and cuticles down to stumps. I've also been eating compulsively, only the richest most fattening things: organic peanuts, candy-coated toxic peanut M&M's, and for my last act before sleep, organic raw cashews.

In truth, there is no reason on earth why I shouldn't continue having a long and lively career. It could be in radio, in print, online or in public lectures, on tv shows and in books.

But there's a journey in-between and it heads right through the land of loss, which is where I'm reporting from tonight, live! and up to my neck in decades of memories of the people I've met and the places I've been because of this job...and the nail-bitten terror that the loss will drown me and I won't be able to breathe.

Which reminds me of breathing deeply and fully and one of the happiest moments of the last year. And that's how I'm going to get to sleep tonight in anticipation of a far better day sometime soon. Maybe even tomorrow. 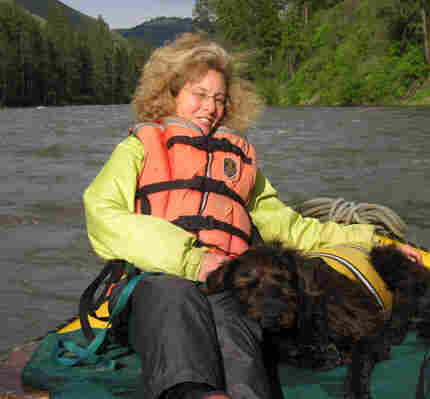 On a golden weekend in May on the Grand Ronde River, before the sun and warmth disappeared for another two months, Zoe Mae and I lucked out and ended up on a 6 hour raft trip that made me a lifelong convert to eastern Oregon. photo credit: Dana Orrick hide caption