Accessibility links
Ordinary Oprahs : Tell Me More We were interested in the hullabaloo surrounding the opening of Oprah Winfrey's Leadership Academy for Girls in South Africa. We stumbled onto a story, actually. We realized t 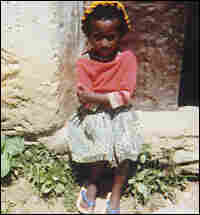 The death of Medhine (above), a 9-year-old from Feres Mai, Ethiopia, gave Lidia Schaefer, a manicurist from Washington, D.C., the inspiration to build a school for the African village. Medhine was killed by hyenas during her three-hour walk home from the nearest school. Courtesy of Lidia Shaefer hide caption

We were interested in the hullabaloo surrounding the opening of Oprah Winfrey's Leadership Academy for Girls in South Africa. We stumbled onto a story, actually. We realized that two people we see all the time are doing what Oprah has just done, and let me tell you, they don't have Oprah-sized pockets.

Lidia Schaefer works as a manicurist at a salon in Washington, D.C., but she managed to build schoolhouses in Ethiopia. And Wendy Johnson, an administrative assistant here at NPR, works part time so that she has the time to hand deliver her contributions in support of projects overseas. We thought you'd be interested in meeting them and hearing about what they do. We broaden the story with a conversation with Dennis Whittle from Global Giving, an organization that helps small donors find worthy projects. We also talk with Gene Sperling, a leading economist who tells us why this is good for the world and not just the soul.

Oprah stories are irresistible, but discovering that ordinary people are doing the same thing was too good to pass up. Do you agree? Tell us what you think. Was it interesting? Did it keep your attention? Are you comfortable with the variety of accents you heard? Did you hear something that you have not heard anywhere else? And did it make you think about the choices you make with your time and money?