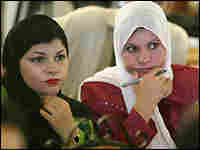 Iraqi women listen as the head of the Rafadin Women's Coalition, Iman Abdel-Jabber, speaks during a press conference in Baghdad, August 3, 2005. The RWC works to encourage women to play an active role in Iraqi politics. Ahmad Al-Rubaye/AFP/Getty Images hide caption

Unless you've taken a vow of no news, you've probably heard that Sen. Hillary Clinton (D-NY), the former first lady, has decided to run for president. No doubt this will occasion even more commentary than we've already had about whether a woman can be elected, whether women govern differently and so on.

So I don't want to talk about that.

Here's what I do want to talk about: The U.N. estimates that only 15 percent of heads of state, parliamentary and cabinet ministry positions worldwide are held by women.
What difference does this make? One difference it makes is that reporters traditionally pursue "leaders" for comment on significant stories. The logic is that these are the people in a position to effect change so we want to know what they think. But what if there are no women "leaders"? Do we lose an important perspective, as the quote above, from Sudanese politician Mariam Alsadig Almadi suggests?

I mention Sudan because an ongoing civil conflict -- U.S. officials have called it genocide -- centered in the Darfur region has left tens of thousands of people dead and hundreds of thousands displaced. New Mexico's Governor Bill Richardson just returned from Darfur where he was participating in talks to support a previously negotiated ceasefire; he spoke to Talk of the Nation's Neal Conan about his trip.

If you've followed this story then you've probably seen many images of women weeping or carrying sick babies or staring the traumatized war victims' stare. What you probably have not seen or heard are women taking leadership or even being consulted in regard to the events that so affect their lives. So when we had a chance to interview two women political officials from Sudan, we could not pass it up.

A group called the Initiative for Inclusive Security, which recently hosted its eighth annual conference in Washington, wants to increase political participation among women in "high conflict" and post-conflict areas. The conferences allow women leaders to learn skills from each other as well as from other political and policy professionals. This year delegations came from Colombia, Nepal, Uganda and Sudan. Individuals came from Liberia and Iraq.

We honestly cannot tell you whether the women we interviewed would be considered "power players" back home. One, Amna Ahmed Ali, was born in Darfur and was one of the first women graduates of the University of Khartoum. She is a civil servant who now works on development projects in Darfur. Mariam Alsadig Almadi, quoted above, is a former pediatrician who gave up medicine for politics. She is now a communications officer for the Umma National Party, a secular Islamic centrist party (and an opposition party).

We thought the opportunity to hear from women in positions of responsibility in that region was so rare that it was worth it just to hear their voices and opinions.

Also joining our group: Mishkat Al Moumin, who somehow managed to survive as a lecturer in human rights at Baghdad University under Saddam Hussein's regime, only to be the target of two assassination attempts during her stint as Minister of the Environment in the interim Iraqi government. Her take on how to move forward in Iraq is very different from what you have been hearing elsewhere.

We've said that one of the missions of this program is to let you hear voices that often go unheard. In today's show, you'll truly hear some of those different voices.

To expand on the question of women in leadership, we also talked to the person who founded the Initiative for Inclusive Security, someone who feels passionately about the importance of promoting women's political participation. Swanee Hunt is a former Ambassador to Austria in the Clinton administration. She is a philanthropist, has a doctorate in theology and happens to be one of the daughters of the now-deceased H.L. Hunt, once one of the richest men in the world. She recently published a memoir about her own remarkable journey to leadership, so we decided to interview her as well.

And there's more: We round out the program with a commentary by economist Julianne Malveaux, well known to some for her appearances on News & Notes and other programs. Dr. Malveaux didn't appreciate a comment made by Sen. Barbara Boxer (D-CA) to Secretary of State Condi Rice last week and... well... we'll just let her tell you.

I know this is a long post, but I thought I needed to take a little extra time to explain some of our editorial choices this week.

I'll be out of pocket for a couple of days; I'm guest-hosting this week on News & Notes, which is based in Los Angeles, so I may or may not post something from there. We don't want to let that California bliss escape.

My questions for this week: The interviews are a bit long... we have a traditional idea of the length a program should be and we have completely disregarded that in this case. Is the length OK or did your attention wander? And the accents may be heavier than you are accustomed to for an American program. We felt that the opportunity to hear from these women in their own words was worth the risk of turning you off because of it. Do you agree with our decision? And thank you again for helping us with this project.