Accessibility links
Debating Justice Thomas : Tell Me More In brief, Angela Wright is another woman, a former EEOC staffer, who said that Clarence Thomas sexually harassed her ... NPR has a standing request in for an interview with Justice Thomas ... 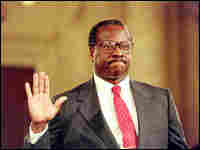 To some of you that name will be vaguely familiar. To others of you it will not register at all. But if you perform a simple web search on Angela Wright and Clarence Thomas, together, you will learn that she was also a part of the drama surrounding the Senate confirmation hearings that gripped the country 16 years ago.

In brief, Angela Wright is another woman, a former EEOC staffer, who said that Clarence Thomas sexually harassed her when she worked at the agency he once headed. Wright is a former Director of Public Affairs. Like Thomas, she was a young Republican. Like Thomas, she considered herself conservative. And, as she tells us, she considered herself both loyal to him and supportive. But, she says, when she learned of Anita Hill's allegations, she immediately found them credible because she had experienced similar behavior. Wright says she did not consider it frightening; merely annoying. Why, and how, her testimony is little known is the subject of our exclusive interview.

Some of you might wonder why we did not approach Justice Thomas for his reaction. NPR has a standing request for an interview with him in connection with his recently published memoir My Grandfather's Son. To date, Justice Thomas has not granted NPR's request. So, we invited Thomas' close friend and former colleague Armstrong Williams on the program, a decision with which some of you disagree. We think having a conversation with him about Thomas was the right thing to do, as we also believe it is the right thing to hear from another participant in the story with a different -- in this instance, a very different -- perspective and recollection of events.

But, needless to say, we would still appreciate the opportunity to hear directly from Justice Thomas, particularly since Wright directly contradicts the testimony he presented about her, and her reasons for leaving the EEOC. They both agree that she was fired -- it was an at-will position, a political appointment. But in 1991, Thomas testified that it was because she used inappropriate language to refer to another staffer; she says that Thomas merely wanted to offer the position to a close associate of another EEO commissioner. As evidence, Wright points to the glowing recommendation Thomas gave her when she later sought employment at the Charlotte Observer.

Once again, it's she said, he said. Not pretty, but we feel the public is best served when all sides get their say.

And, we hope it wasn't too big of a head-snap for you, but we had previously scheduled our conversation with Karrine Steffans. It is part of our series about women empowering themselves through non-traditional means. We hope you agree that her point of view was also worth hearing...