Accessibility links
McCain Fights For Late Boxing Legend Jack Johnson : Tell Me More Jack Jackson became the first African-American Heavyweight Champion of the World in 1908. Among Johnson's detractors were those who thought him to be unworthy of the title and its notoriety because many of the champion's (defeated) opponents were ... 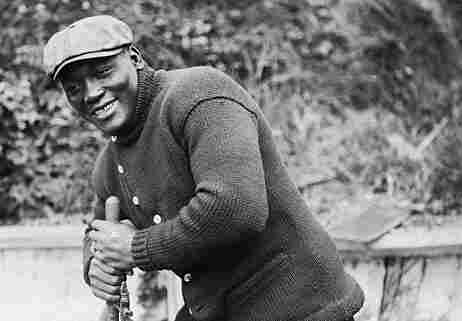 Jack Jackson became the first African-American Heavyweight Champion of the World in 1908. Among Johnson's detractors were those who thought him to be unworthy of the title and its notoriety because many of the champion's (defeated) opponents were white. But tensions reached a tilting point in 1910, after Johnson stepped into the ring to defend his title against boxer Jeff Jeffries. Jeffries had been branded as the "Great White Hope" who would defeat Jack Johnson and end his reign in the sport.

But in 1912, Johnson was convicted of violating the Mann Act, which was intended to crack down on prostitution. The boxing legend was found to have traveled with a white woman, whom he had dated, to another state (Johnson was very public -- and unapologetic -- about his affinity for white women). He went on to serve 10 months in prison, which dealt a blow to his champion profile.

Sen. McCain and Rep. King have asked the president to issue a posthumous pardon for Jack Johnson. In a letter to Obama, McCain (a known boxing fan) suggests the charges were ill-conceived and bogus:

Mr. Johnson served 10 months in prison on these charges brought forward clearly to keep him away from the boxing ring where he continued to defeat his white opponents.

Filmmaker Ken Burns produced a 2005 documentary on the boxer. In the film, Burns references remarks from the man who prosecuted Johnson:

This Negro, in the eyes of many, has been persecuted. Perhaps as an individual he was. But it was his misfortune to be the foremost example of the evil in permitting the intermarriage of whites and blacks.

The pardon, years in the making, now awaits the signature of the president --- almost 100 years after Johnson's arrest. If and when that happens, we'll tell you more ...