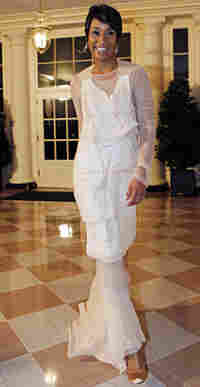 Before Desiree Rogers was social secretary and special assistant to the President, she was a queen. Twice.

Rogers' late father, Roy Glapion, was president of the prestigious Zulu Social Aid and Pleasure Club, New Orleans' oldest black Mardi Gras krewe. She was Queen of Zulu, an honor usually extended to a debutante or young woman deemed to be socially important, in 1988 and 2000. After college at Wellesley and business school at Harvard, Rogers and her then-husband, John Rogers (president of Ariel Capital Management) cut a high-profile swath through Chicago's glittery gratin. And she's regularly cited as one of the country's best (and okay, most adventurously) dressed women.

All great preparation for her current job at the White House.

But Rogers' style and glamour are a double-edged sword, one that might have drawn a little political blood over the past few days after the gate-crasher snafu.

Other social secretaries have stood on the steps to greet guests as they enter the White House for state dinners; it's considered an extension of the first lady's hospitality, since she can't be there at the moment herself. Instead of greeting guests, Rogers functioned as one: she walked the press line, posed for photos and became fodder for the chattering classes by sticking out from the formal versions of Ann Taylor-wear normally seen at state occasions by coming to dinner in cutting-edge Japanese couture.

Some have even suggested that Rogers step down, since she can't contain her own ego needs to serve the first lady. That probably won't happen. For one thing, she has a powerful protector and loyal friend in Obama mentor Valerie Jarrett. For another, Michelle Obama values Rogers' style and savvy; the first lady clearly feels her social secretary has her back when it counts, regardless of what she's wearing.

Every new administration has its learning curve, and this may have been Rogers' teachable moment. She didn't get as far as she's gotten by not grasping what's important right away. And if I were a betting person -- which I'm not -- I'd be betting that she'll be the woman overseeing the next state dinner, that she'll be personally greeting guests as they ascend the White House steps and that she will still stun. But on official White House occasions, with slightly lower voltage.

(Karen Grigsby Bates is an NPR correspondent based in Los Angeles. To hear more about the White House gate crashers story, click here for a recent conversation on Tell Me More.)