Accessibility links
I Won, Thank God : Tell Me More In a way, religion in America is a lot like parenthood. We all demand a great level of respect and privacy about our own choices, but we seem way too ready to call out other people who we think are doing it wrong. 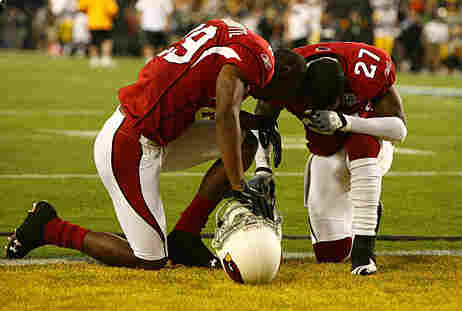 Dominique Rodgers-Cromartie and Michael Adams of the Arizona Cardinals pray before taking on the Pittsburgh Steelers in Super Bowl XLIII in 2009 at Raymond James Stadium in Tampa, Florida. Al Bello/Getty Images hide caption

I don't know whether God is a football fan. As a long-suffering Washingtonian, I can tell you for sure, He's NOT a Redskins' fan.

In today's Faith Matters, we had a provocative conversation about pro athletes who bring their faith up in the locker room, or in their victory speeches. Michel talked with Tom Krattenmaker, the author of "Onward Christian Athletes: Turning Ballparks into Pulpits and Players into Preachers," about the growing prominence of evangelical Christianity among sports stars.

Krattenmaker talked about how some of his fellow sports fans rolled their eyes when they heard athletes thanking God after a big win. And while he saw nothing wrong with those speeches, he suggested that faithful athletes should be as ready to talk about God whether they win or lose. And he did call for some of these athletes to embrace a broader vision of Christianity.

To me, sports and faith are touchy subjects. I believe a relationship with God is the most personal and intimate one of your life. So when people go on and on about every facet of their faith in public spaces, sometimes it reminds me of people who start spewing details about their divorce or their stint in rehab five minutes after you meet them.

But that's not what most of these athletes are doing. When victorious athletes or weepy actors get that 45 seconds on camera right after the best moment of their lives, I think it's perfectly fine for them to add God to the long list of family members, teachers, co-stars and agents who get a special thanks.

As for why members of the losing team never mention God in all their post-game interviews, people of faith can spend years trying to figure out what lessons God wants them to take from a failure...in a game, or a job, or a relationship. And the moments after the loss, they're just at the start of the process, and probably not ready to tell the world about it.

Then, there's the question about which parts of Christianity these athletes seem to embrace, and whether they're too invested in the evangelical side of their faith, but not enough in the social justice side. But that critique presumes that we know more than we possibly could about the lives of these athletes, and that --just because EVERYONE sees them thanking God in a victory speech-- that's where their faith stops. Is it possible that they're living a life of faith away from the cameras, and that they're doing several small things that their publicist and their fans might not know about that reflect a broader religious vision?

In a way, religion in America is a lot like parenthood. We all demand a great level of respect and privacy about our own choices, but we seem way too ready to call out other people who we think are doing it wrong. So instead of sneering at their post-game prayers, let's focus on rolling our eyes when our favorite athletes drop a winning pass, or curse out a fan, or get arrested for doing something despicable off the field. There are more than enough chances to do that.