Accessibility links
Eddie Murphy: Hollywood's Million-Dollar Donkey : Tell Me More Jimi Izrael says the actor's choices have befuddled critics and admirers alike. Love him or not, he remains money at the box office -- even as a sidekick in the Shrek series -- and he generally gets the last laugh. 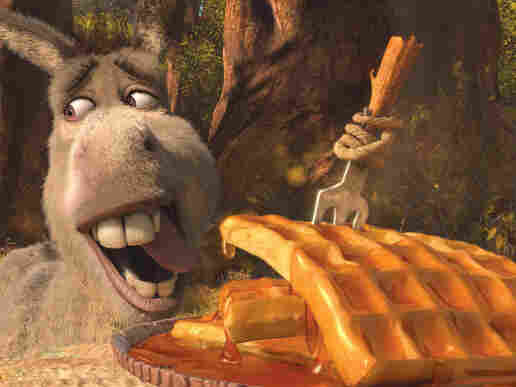 Eddie Murphy is the voice of "Donkey," who appears in the final Shrek movie, a series based on a book by prolific author William Steig. Mike Myers voices the lead character, but is often upstaged by Murphy, who anchors this franchise.

As an actor, Murphy seems drawn to stories about outsiders trying to work their way in and he consistently chooses these parts -- with varying degrees of success. But he keeps working and that's something a lot of actors can’t say.

Murphy continues to succeed where many of his contemporaries fall off and it isn't (just) that Murphy is more talented than his predecessors and proteges. Rather, he has a willingness to evolve -- and a refusal to be pigeonholed -- that has endeared, confused and disgusted the critics, while bewildering the Hollywood machine with his ability to make critical failures that ring up big bucks at the box office. The second highest-grossing movie actor of all time (behind Tom Hanks and ahead of Harrison Ford) and probably the only black man in Hollywood who can green-light a movie project, no one could have predicted that this foul-mouthed comedian from Brooklyn would evolve into an actor of range and depth.

Early on as a cast member on Saturday Night Live, Murphy didn't mind crafting his own brand of blackface by building a repertoire built on characters like Buckwheat (based on Little Rascals child actor/film editor William Thomas' most famous role) and Velvet Jones. Murphy was roundly criticized for his blue humor and reliance on catch phrases, his laugh and puckish (nearly coon-ish) smile to entertain a predominantly white audience.

He also caught flak from America's Dad who reportedly (although Bill Cosby disputes Murphy's recollection) admonished him to curtail his profanity in a conversation that made great fodder for one of Murphy's best known NSFW bits (too profane to post here -- search YouTube for "Eddie Murphy -- Bill Cosby & Richard Pryor").

His stand-up comedy wasn't ironic or overtly political -- it might have have just been sad if all of it wasn't based on some kernel of truth. Unlike Richard Pryor, he didn't seem interested in making white people feel guilty or complicit in American racism, and his politics never dominated his work. He's never been able to make everyone happy, but he always makes all of us laugh.

From playing multiple characters in Coming to America to his turn as James Early in Dreamgirls and the many risky choices in between, Murphy's success is born of a hubris that enables him to ignore critics, allow himself to be typecast or never show fear of failure. Murphy has big successes and big failures and his unpredictability enables him to flow freely through the Hollywood system in a way few others can. Whether outfitted in a fat suit, playing a clueless single father, a fallen singer or voicing a kids' movie, Murphy's appeal is that, for good or bad, we never know what he will do next.

But no one wants to be the last person to find out.

Jimi Izrael is a freelance journalist for TheRoot.com, an author and a regular contributor to "Tell Me More."