Accessibility links
SNL Strikes Out Again In The Box Office : Tell Me More Sketch comedy is always risky, but never as much as when you stretch a gag out 80-some minutes longer than it was ever meant to go.

SNL Strikes Out Again In The Box Office

SNL Strikes Out Again In The Box Office 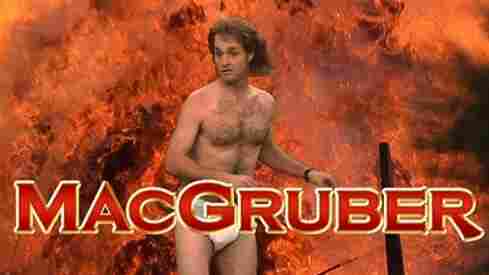 Sketch comedy is always risky, but never as much as when you stretch a gag out 80-some minutes longer than it was ever meant to go. No one knows this better than Lorne Michaels and the writers of Saturday Night Live. Yet, they continue to turn skits into movie vehicles with the intention of catapulting a featured player into Hollywood stardom. Saturday Night Live’s MacGruber, the latest film from the house Belushi built, underwhelmed the ticket-takers last weekend, taking in only $4.1 million and opening in sixth place. The movie only cost $10 million to make, but even with all the fan love it may be a slow crawl to even-money.

I find it fascinating that despite conventional wisdom, Michaels continues to turn skits into movie vehicles in hope that they re-invigorate the waning SNL brand. And these gambits have turned out about how you’d expect -- few turned a profit in the theaters. Even fewer are worth seeing the whole way through. Reasonable people -- like me -- could make a case for SNL to get out of the movie business.

· Blues Brothers (1980) -- The great skit became a great film because it had every impossibility working for it: two comedic firebrands with a natural chemistry, a young TV producer stepping out of his lane with nothing to lose and a hungry audience waiting to see what outrageous thing SNL would do next. Timing + talent = masterpiece.

· Wayne’s World (1992) -- Another film written around the rhythm between two comics in their prime, WW is an excellent film of its time that celebrated and lampooned its audience at the same time. So far, so good.

· Coneheads (1993) -- maybe the last SNL movie that was funny from beginning to end, Coneheads, more so than its predecessors, seemed to be an entire story and not just an extension of skit. A little gimmicky, but not too much.

· Stuart Saves His Family (1995) -- An entire movie built around a marginally popular sketch character and… nobody cared? Wow, who saw that coming? But everyone makes a misstep, right?

· A Night At the Roxbury (1998) -- Will Ferrell, against the odds, carried this film with a lot of slapstick and one-liners. If not for that one annoying song, it would have been completely forgettable. The milk starts to turn somewhere around here….

· Blue Brothers 2000 (1998) -- A shameful exploitation of a fabulous film -- strictly an attempt to bleed the last bit of good will and money from the original.  Maybe the first sign that the SNL brain-trust was running out of ideas.

· Superstar (1999) -- With Molly Shannon and Ferrell, how could this film have gone so horribly wrong? Who knows, but this is definitely the first in a line of films that looked good on paper, but never came together onscreen. Oy.

· The Ladies Man (2000) -- A concept with legs meets Tim Meadows  and director Reggie Hudlin, but somehow this film came crashing to Earth in a ball of flames.

· Macgruber (2010) -- A movie built on a sketch that spoofs a popular show from the 80s, who’s creators have threatened to sue. And I don’t blame them.

Try as they might SNL rarely gets it right at the cinema.