Accessibility links
The White Washing Of 'The Last Airbender' : Tell Me More Tell Me More’s Alicia Montgomery asks what difference, if any, does it make to have people of color star in the latest blockbusters?

The White Washing Of 'The Last Airbender'

The White Washing Of 'The Last Airbender' 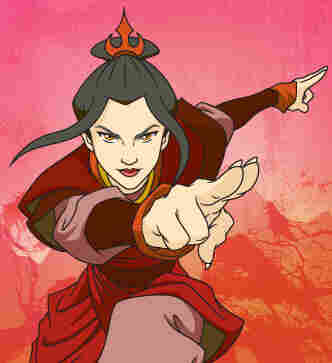 Azula, one of the characters from the Nickelodeon program Avatar: The Last Airbender. Nickelodeon hide caption

With July 4th coming up, many of our minds are on what we're doing for the holiday weekend. And even die-hard barbecuers might want an escape from the steamy weather, so many of us will spend part of our days off at the movie theater. On Wednesday, our program will give you a taste of what's coming at the multiplex, with a dash of Tell Me More flavor.

The movie version of the Nickelodeon cartoon series Avatar: The Last Airbender is ready for it's close up, with the live-action film opening at theaters on Thursday. The TV show developed a loving cult following of fans, many of whom are all ready hating on this movie. That's because, while the characters leading the show were clearly Inuit and Asian, most of the top roles in the film cast went to white actors. Fans of the series are furious -- and fighting back -- about what they see as the waste of a rare opportunity to give Asian American performers a big screen break through. And the anti-buzz has been building on blogs such as "Angry Asian Man" and "Racialicous" for months. At Racebending.com, a network of disappointed fans has organized a campaign to boycott the film, and call for more opportunities for Asian-American performers in Hollywood.

On Wednesday's program, we'll hear from a pair of our favorite pop culture guests -- Wesley Morris of The Boston Globe and Jeff Yang of The San Francisco Chronicle -- about the controversy, and what kind of roles actors of color have gotten in this year's summer films. And, as always on Tell Me More, we want to hear from you. Are you planning to see The Last Airbender? Does the controversy matter to you? And what difference -- if any -- do you think it makes to have people of color star in the latest blockbusters?

Tell US more, and you may hear your comment in our Friday letters segment, BackTalk.