Accessibility links
The Levees Failed, The Spirit Of New Orleans Prevails : Tell Me More In the years after Hurricane Katrina, writer Malik Washington traveled to New Orleans to help the city's residents rebuild.  He reflects on the lessons learned about the spirit of the Crescent City.

The Levees Failed, But The Spirit Of New Orleans Prevails

The Levees Failed, But The Spirit Of New Orleans Prevails 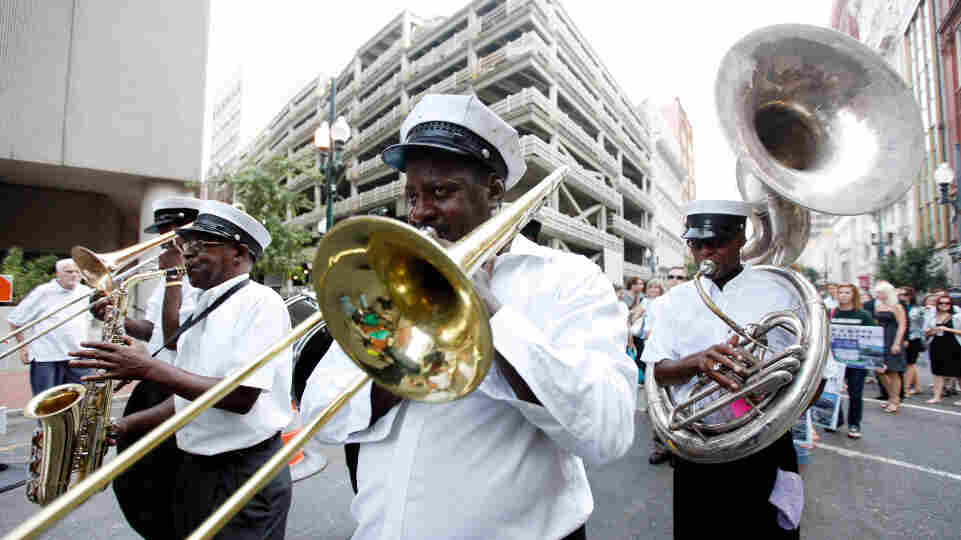 A band plays as they walk in a jazz funeral to honor Katrina victims on Wednesday in New Orleans. Chris Graythen/Getty Images hide caption

I remember the first time I visited New Orleans as a child.

For me, it was somewhere, effervescent, above the murky waters of the Mississippi.

As I grew older I came to understand that what enthralled me was the spirit of Africans, both free and enslaved, who built the city. And despite interactions with a "New World", they preserved and remixed much of what they knew, from the West African religion of vodun (voodoo) to an African-infused dialect of French and English.

Ten years after my first visit, I returned.

And though the buoyancy of New Orleanians was ever-present, it seemed that joy had floated away and what was left was solely the effort to survive. It was 2007, two years after Hurricane Katrina, and I no longer recognized New Orleans as a place where people lived, let alone the place it once was.

Pedestrians on once-bustling streets were replaced with trash and debris that hadn't been touched since the storm. Neutral zones, or medians, that served as havens of flora and streetcars, were barren in a reddish-brown hue that gave way to rusted memories.

Like many others during and after the storm, I watched from my television, feeling as though I was there when in reality I was no closer than the news helicopter that flew above.

I was moved to go to New Orleans out of shame that I hadn't done anything to assist my brethren during one of the greatest tragedies this country has seen. Since then, I've gutted and rebuilt homes, schools and churches, lending a hand (and an ear) to men, women and children who had done everything they could do with their own.

No sight was more captivating than when I entered a former middle school in St. Bernard Parish and dusted off a child's homework assignment, dated August 19th, 2005, about a week before the storm.

No sight was more heartbreaking than the look on a mother's face when she saw the family photo, lost since the storm, that was the last memory of a young son or daughter she lost soon after.

It was on my first trip back that I met Shelton "Shakespeare" Alexander, a local poet who was featured in Spike Lee's "When The Levees Broke". "Shake" inspired much of my own poetry and watched me first perform my own piece on Katrina. But it was in the recent follow-up documentary "If God Is Willing…" that I learned that the very woman who introduced us, his mother, had since passed away.

That is why my first return to New Orleans was not my last.

Since 2007, I've visited on five different occasions, all in the effort of recovery, rebuilding and supporting the resilient spirit of those in the city who refuse to give up.

On my latest visit, during the Gulf oil crisis, my encounters with residents suggested that the will to make sure that others would never forget Katrina, had been surpassed by the will to forget what happened themselves. As I helped supervise young summer campers at a local swimming pool, my attempts to get anybody to speak to me were handily rejected. A young child even ran at the sight of my recorder. As one friend and resident put it to me simply, "Why do I want to be reminded of Katrina? Very little good came along with Katrina."

But nothing said more to me than when that same friend said, "Where has talking about Katrina gotten us?"

I cannot fathom that it’s been five years since the hurricane.

From building homes with Habitat for Humanity to listening to congressional hearings with Louisiana Senator Mary Landrieu and New Orleans Mayor C. Ray Nagin in D.C., I've seen so much change, yet so much stay the same.

Stains on the walls of buildings remind us where the floodwaters settled, sometimes 15-feet high. Vegetation flourishes, often overtaking the concrete that once served as the foundation to homes. New buildings have been built, but only sometimes do the former residents move back in.  As with the gentrification I’ve seen in Washington, D.C., many non-black upwardly mobiles have flooded the city.

There are those who want to see a New New Orleans. Indeed, New Orleans will never be the same. But let it be known that when every man-made levee failed, it was the spirit of la Nouvelle-Orleans that prevailed. No system of levees, canals and pumps can ever replace that. Rebuild as they wish, but remove the very people who carry the most unique and resilient spirit this country has ever seen, and you're in for a rude awakening.

Writer Malik Washington is a graduating senior at Howard University and is author of the blog Normative Chaos.