Accessibility links
Where's The 'Village' For Our Youth? : Tell Me More Guest host Allison Keyes shares her thoughts in the weekly "Can I Just Tell You" commentary. Keyes is concerned over the rising numbers in teen violence, and suggests a return to the concept of "it takes a village to raise a child."

Listen
Where's The 'Village' For Our Youth? 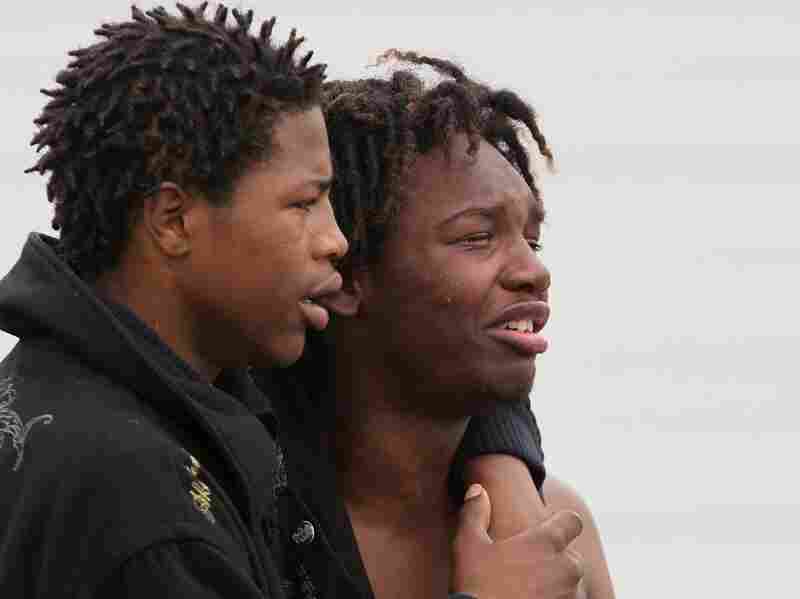 Young men grieve in Chicago near the spot where police stood guard over the bodies of two alleged murder victims believed to be boys in their late teens this past summer. Scott Olson/Getty Images hide caption

Recently, I was standing inside of a shiny new drug store in Southwest Washington. On this sunny fall day – the people in line stood – shaking their heads and muttering as a security guard sternly ordered a group of young men who seemed to be in their early teens to get away from the door.

The moment he turned his back – three of them darted into the store and down two aisles – aimlessly knocking things from the shelves as they whooped and hollered. One snatched some candy from a shelf before the guard lumbered back and chased them out. As they fled – several hurled rocks into the store.

Now, I don't have any kids. But can I just tell you? Where I grew up, some adult would've stepped in to say or do something, and then those kids would have gotten in trouble when they got home because that person would have called mom or dad! These days, intervening seems like a much more dangerous response. So of course, no one stepped in. They just looked angry.

"Uh uh uh" – sighed the woman in front of me. "I see this all the time. That junior high school up the block lets out and it's like a troop of little monsters is unleashed."

The list serve in the neighborhood is full of reports of robberies, vandalism, menacing and worse – all apparently committed by groups of unsupervised children. There was a murder not far from here a few years back – the suspects between the ages of 13 and 15 – and despite the rapid gentrification of the area many residents are afraid.

But the incidents of teen violence are becoming more serious. Though the number of juveniles arrested for violent crimes dropped ten percent between 2008 and 2009 nationally, in the nation's capitol, police chief Cathy Lanier says there's been a dramatic increase in serious crime committed by juveniles in recent years.

An investigation by The Washington Times newspaper finds that of the 110 people publicly identified by police and prosecutors as being arrested for or charged with homicide between September 1st 2009 and August 31st this year, 41 were 21 or younger.

Who's to blame? The answer — according to many — is a combination of their parents and the economy.

A Metropolitan Police Department officer speaking to a recent tenants meeting in Southwest Washington suggested that the problem is [that] this generation of teens is the offspring of people who were neglected by their parents, so that today's teens often have no one to teach them how to behave. It also doesn't help that in many cities, recreation centers and other places where children could gather after school have been shuttered due to funding, leaving the kids nowhere to be and nothing to do, but look for trouble.

In Philadelphia, which has dealt with several mobs of unruly teens this year, police have said they will hold parents responsible for their children's actions. In Detroit and Sacramento, there were calls for legislation that could lead to jail for parents who skipped parent teacher conferences, or whose kids were skipping school.

Now, I'm not suggesting that kind of legislation is going to help stop the violence. But it seems like something's got to change.

Again, I am not a parent. Maybe that time out thing some parents do rather than punishing or spanking their kids isn't working so well. Nor is giving your offspring violent video games and then wondering where they get the thought that robbing someone at gunpoint is cool. '

But I think a return, where possible, to the idea that it takes a village, or at least a neighborhood, to raise a child — creating a place where people watch out for each other and their kids — might help.