Accessibility links
American Barista Fulfills Olympic Dream — On Swiss Hockey Team : The Edge Jessica Lutz has shuttled between Europe and the U.S., with the goal of getting to the Sochi Olympics. For most of the past year, she crafted latte art at a Washington, D.C., coffee shop. 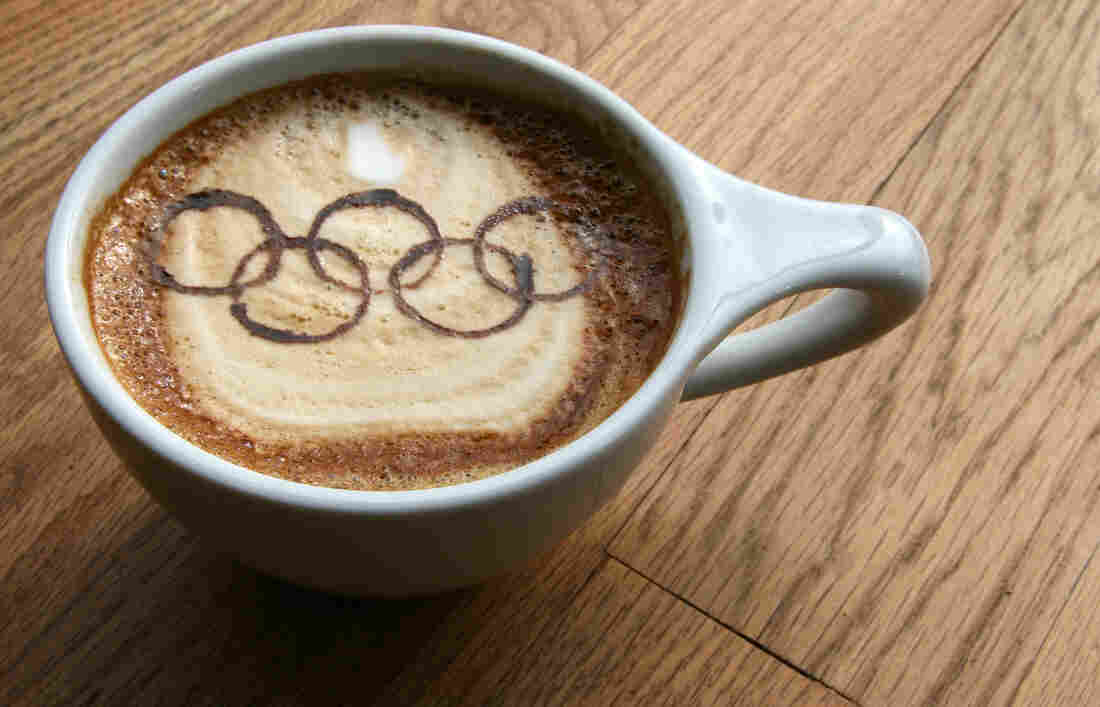 Jessica Lutz is heading to the Winter Olympics from her job at a coffee shop in Washington. Recently, her fellow baristas made a latte in her honor. Lauren Katz/NPR hide caption 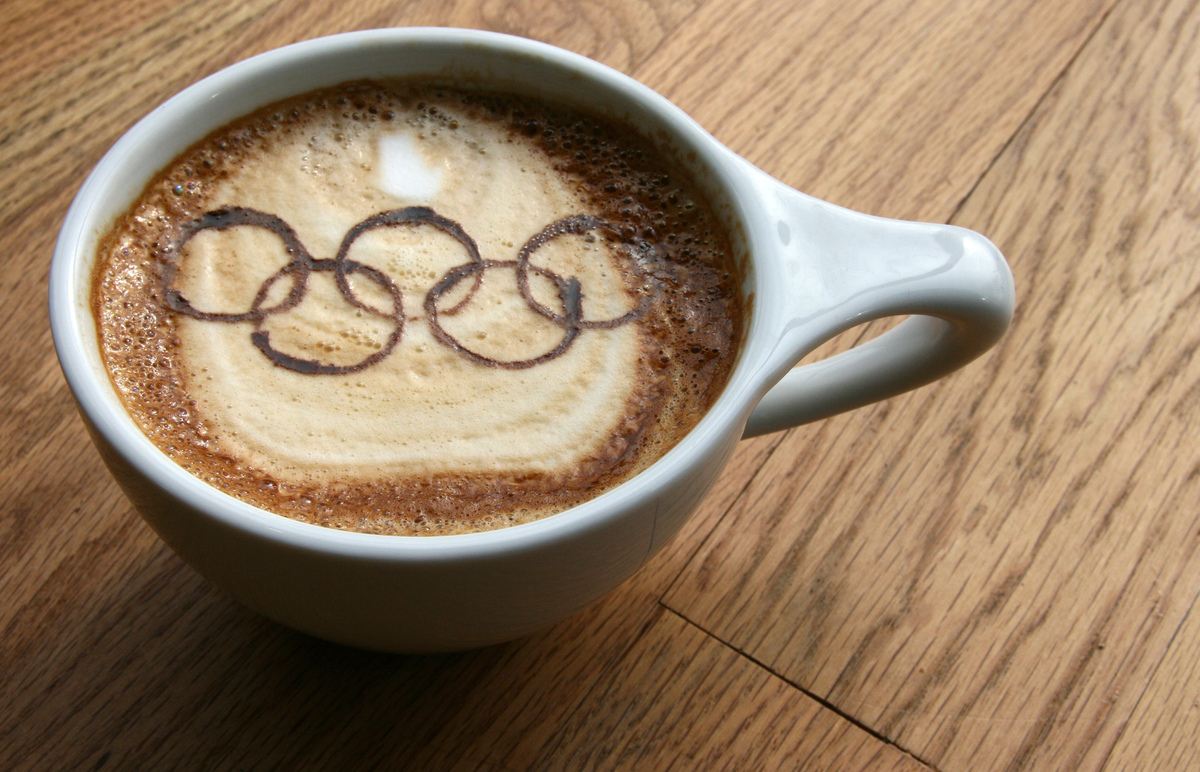 Jessica Lutz is heading to the Winter Olympics from her job at a coffee shop in Washington. Recently, her fellow baristas made a latte in her honor.

Jessica Lutz is on her way from making arty designs in coffee cups to carving Olympic ice in Sochi. And although she grew up in the U.S., Lutz will compete for the Swiss hockey team. Her story is an example of the sacrifices and strategies many athletes rely on to get to the games.

For most of the past year, Lutz, 24, crafted latte art as a barista in Washington, D.C. Born and raised in the D.C. suburb of Rockville, Md., Lutz had a chance to compete for Switzerland because of her father's nationality (she's a dual citizen).

Her path to Sochi hasn't always been certain, or direct. Lutz moved to Bern, Switzerland, in the summer of 2010 after graduating from the University of Connecticut, where she played Division I hockey.

Lutz planned to play after college, but she was realistic about her ability to make the U.S. national team. An overwhelming number of athletes were competing for only a few spots.

"I wanted to play at the highest level that I could," Lutz said. "It was always a goal to go to the Olympics, and so I figured out that my chances in Switzerland would be a lot better."

The most competitive countries in women's ice hockey are the U.S. and Canada, who often take the top two spots in competitions. But the Swiss team is hoping for a medal.

"I think we have a little bit of a chance for a bronze," Lutz says. "That's our goal." 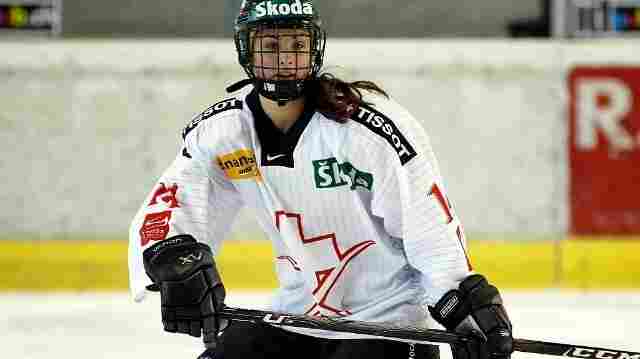 Jessica Lutz will skate for Switzerland in the Sochi Olympics next month. For most of past year, she worked at a Washington coffee shop in the mornings and trained in the afternoons. Jessica Lutz hide caption

In January, Lutz was officially selected as one of 21 women to represent Switzerland in the 2014 Winter Olympics.

She spent the past three years playing for EV Bomo Thun and one other team in the Swiss women's hockey league. Players who don't live in the country must play in the league for two seasons before they're eligible for the national team.

Over time, Lutz realized that ice hockey was the only aspect of her life abroad that seemed to work out. It was difficult to find a job in Switzerland because her bachelor's degree was not accepted, and she missed her friends.

"I didn't really see myself staying long-term," she said.

So with the Olympics on the horizon and an invitation to play for the Swiss in a December tournament in Austria, Lutz moved back to Washington, D.C., last March.

In D.C., she landed a job as a barista at The Coffee Bar, where she perfected the coffee art skills she'd learned working at an Italian cafe in Switzerland. Her morning shifts also allowed her time to focus on her Olympic goal.

"I was looking for a job that would be flexible so I could continue to train," she says, "but also something that I enjoyed doing."

To stay in shape for a potential spot on the national team, Lutz worked out and played pick-up hockey games at local ice rinks. She was almost always the only female player on the ice, which she said was a good challenge.

"It's definitely hard to be motivated when you're training by yourself all the time," she said.

As unique as Lutz's story might seem, it's not unusual for Swiss hockey players to disperse and play in other countries. Two of her teammates played in Sweden last year; others play for U.S. colleges. Their only chance to be evaluated by the Swiss coaches is at a handful of tournaments.

Aside from those tournaments, Lutz hadn't seen any of her Swiss coaches or teammates since last April's World Championships in Canada. But that doesn't mean they were all taking a break: All athletes are responsible for staying in shape, she says.

"You have to show up and really perform well to prove that you've been working hard," Lutz said, "and you've been doing what you're supposed to be doing."

That determination is what secured her a spot on the Swiss team.

Lutz is now reunited with her hockey team in Switzerland. As she prepares to travel to Sochi, she's thinking about teamwork — whether skating on the ice or dealing with a line of customers on a Saturday morning.

"Everyone needs to be on, doing their job and working well together. I think that's the same for a hockey game," she says. "Everyone has to be doing their individual job for the team to succeed."

Lauren Katz is an intern on NPR's Social Media desk. We'll have an update on Lutz's experience in Sochi as the games progress.