Accessibility links
The Norwegian Athlete Who's One Medal Away From History : The Edge Ole Einar Bjoerndalen is a biathlete competing for a record 13th medal — which would make him the most decorated athlete ever at the Winter Games. No one has ever been so good for so long in his sport. "He's 40 years old, and he's motivated like an 18-year-old," says one expert. 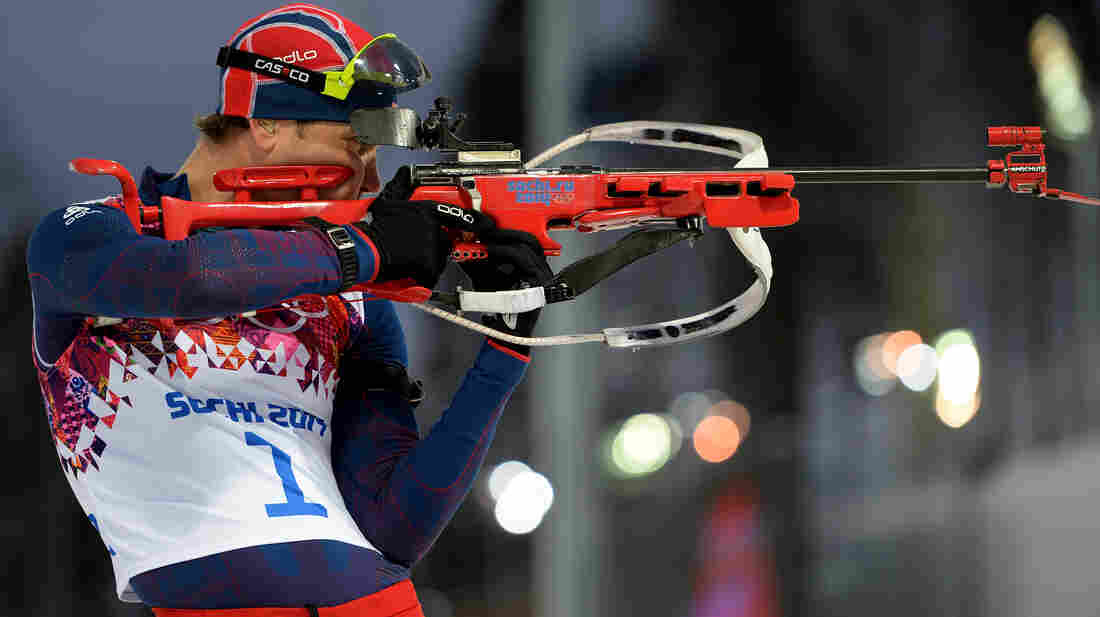 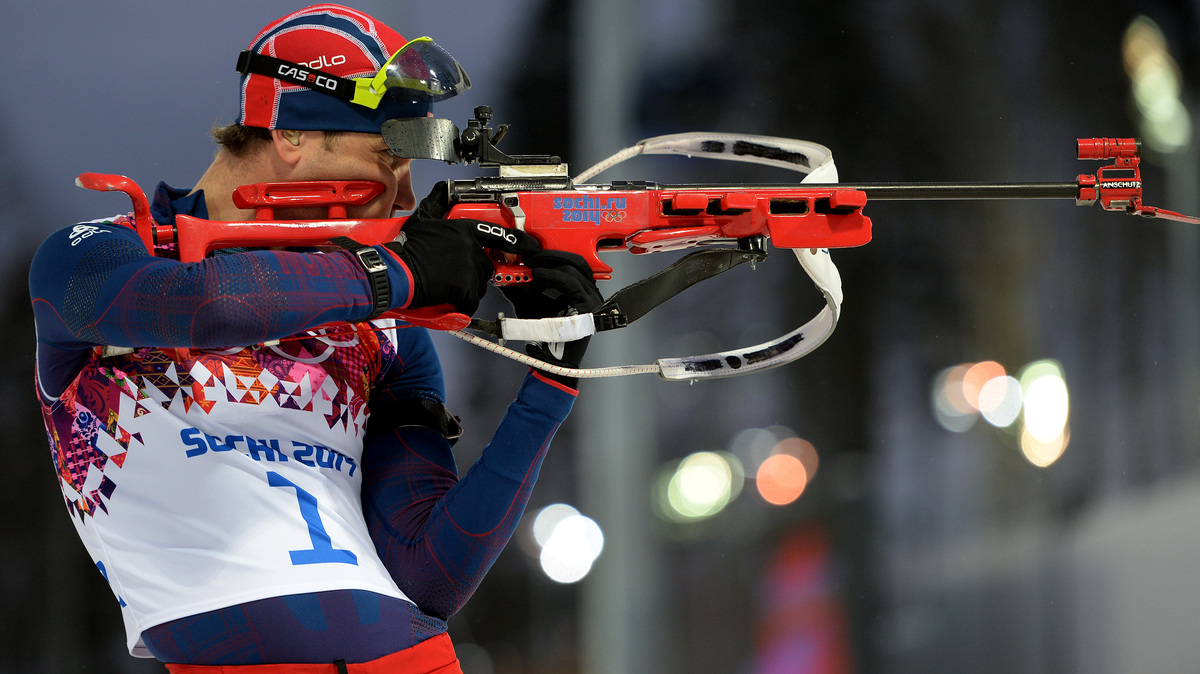 Ole Einar Bjoerndalen of Norway practices in Sochi on Monday.

On Monday, Norwegian Ole Einar Bjoerndalen came a ski-length away from winning a 13th Olympic medal and becoming the most decorated athlete ever at the Winter Games.

The biathlon pursuit Olympic event — cross-country skiing with rifle shooting — is a pretty devious race. The fastest man goes first, and then everyone else in the race tries to catch him before the finish line. And in Monday's competition, Bjoerndalen went first.

Just to make clear: Bjoerndalen is 40. The guys chasing him are in their 20s. In one sense, the kids will never, ever catch him, because no one has ever been so good for so long in his sport.

Biathlon is often mocked in the United States. Skiing and shooting? Come on. But think of it: Six different Olympics. Seven gold medals. Twelve medals total. If Bjoerndalen had done that on downhill skis, he'd be on every cereal box. In Norway, he sort of is.

"He is very, very, very famous in Norway. In Germany, you wouldn't believe how popular he is. I've heard of at least two or three children named Ole Einar in Germany," says Andreas Smith, the biathlon expert for Norwegian broadcasting.

He's amazed not just at all the medals but at the way Bjoerndalen approaches the sport.

"He's a perfectionist. His mind is different from everyone else," says Smith. "He's 40 years old, and he's motivated like an 18-year-old."

Combine that motivation with something that an 18-year-old will never have: a certain mental calm. Remember, this sport isn't just about skiing fast. You have to stop, pull out a rifle and shoot at a target. They literally lower their heart rates so their hands don't shake. They clear their minds.

"You can't have any thoughts in your mind. The only thing you should focus on is to be focused on how to handle the rifle and get a good shot," Smith says.

At his race in Sochi on Monday, Bjoerndalen was still ahead after the first lap of the course. He pulled out his rifle, lay down on the snow and fired six shots. He hit every one. On the next lap, getting tired, he missed a shot and had to go on a penalty loop. The third time, he missed again.

The young guys finally caught up with Bjoerndalen. A French skier named Martin Fourcade hit his targets and took the lead; Bjoerndalen dropped to sixth place. And although he skis faster than anyone else on the course, he couldn't make up the time he lost.

In the stands, a grown man with his face painted as the Norwegian flag dropped his head.

"He just missed his shot, it's as easy as that," he said. "Biathlon is tricky that way because you can ski as fast as you want. But if you miss those shots, there's nothing to do."

As Bjoerndalen walked away from the course, I asked him if the pressure of getting that 13th medal had gotten to him when he aimed his rifle.

Bjoerndalen has a few more races to go in this Olympics, a few more chances to win the 13th medal. But looking forward, he waved his hand and said he doesn't think about it. His mind is clear.