Accessibility links
In Front Of A Home Crowd, Russia Has Hockey History On Its Mind : The Edge Team Russia — led by Alexander Ovechkin — and its fans talk constantly of the 1980 "Miracle on Ice" and the team's loss four years ago in Vancouver. On Saturday, they'll meet a young and "hungry" Team USA. 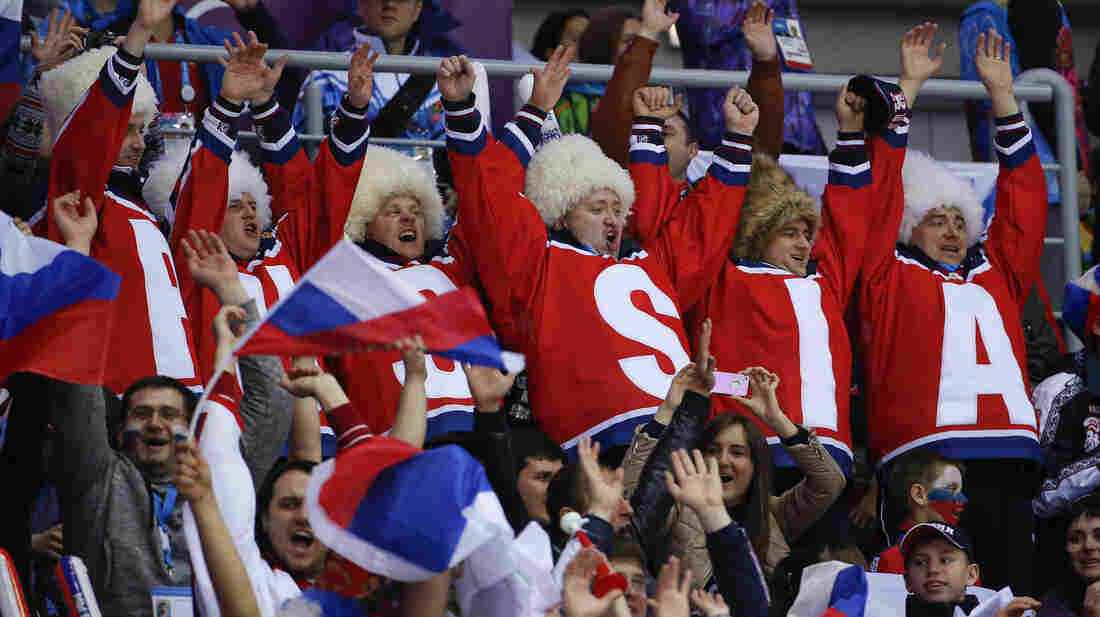 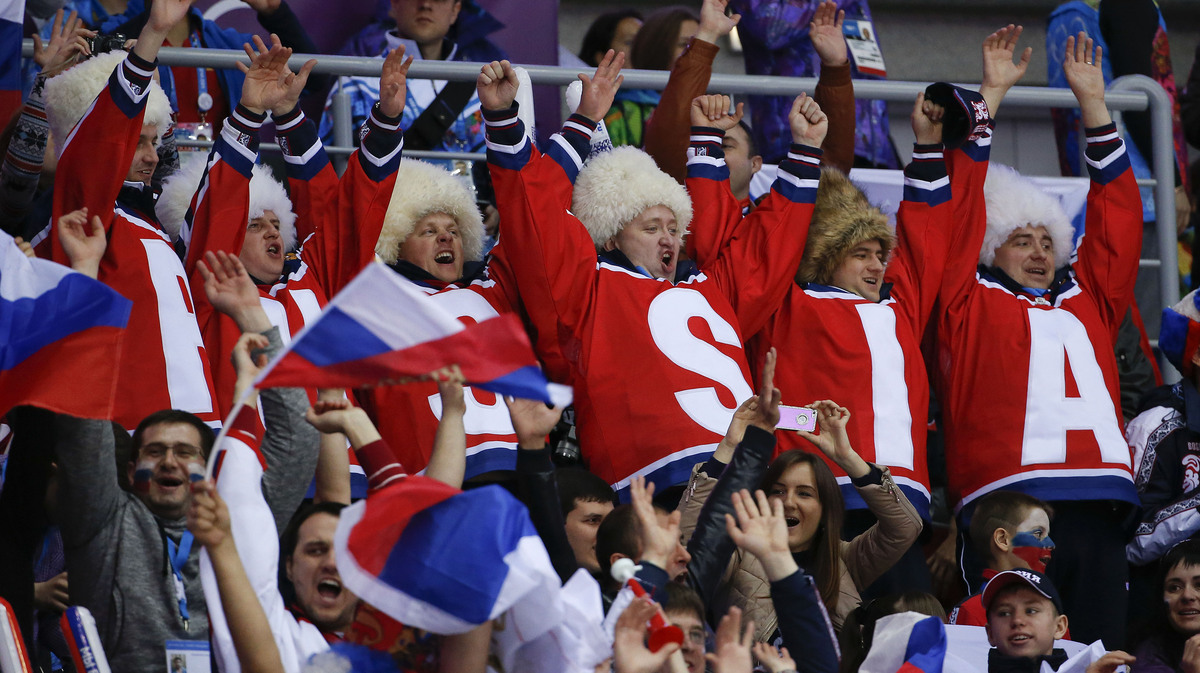 Hockey fans cheer for Russia during the men's game against Slovenia on Thursday.

There is a weird contradiction in Olympic hockey: On one hand, these professional players from the NHL arrive in a small town like movie stars.

They show up a week late, trailed by TV cameras and Russians begging for autographs.

And then they have to go back to basics. Early Thursday, members of Team USA were on the ice, doing the kind of simple drills that you'd see in a peewee hockey league.

Derek Stepan of the New York Rangers was practicing his passes with Justin Faulk of the Carolina Hurricanes. For these stars, who have been busy all winter in the NHL, they have to start over, with unfamiliar teammates, a new coach — and on an Olympic ice rink that is larger than the one they play on at home. 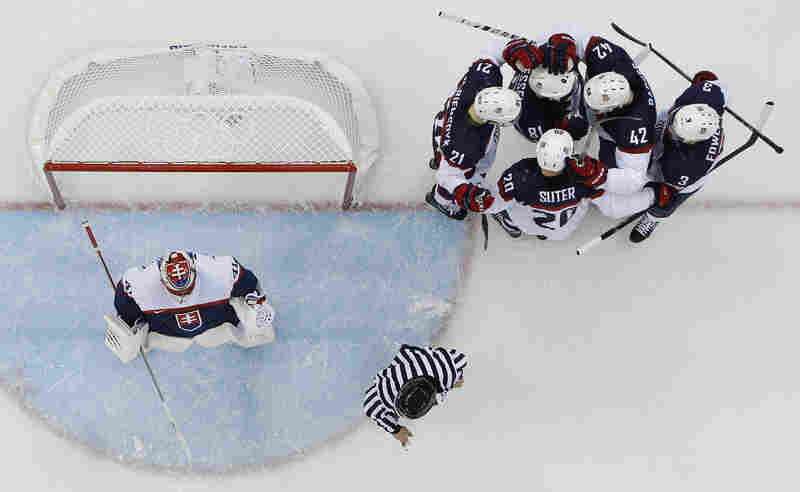 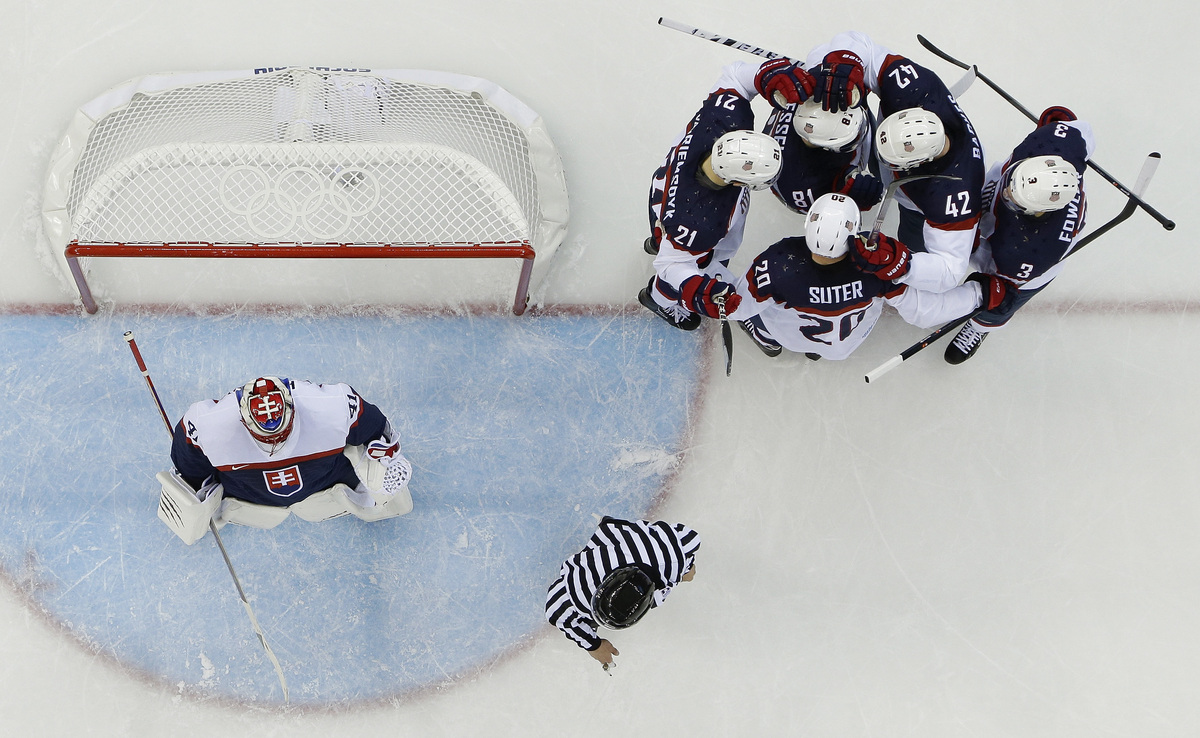 Sergey Krabu, a hockey commentator on Russian TV, says that even though Team USA has had very little practice, they look strong: "Very mobile. Very good goalies. Young team — I would say hungry."

But the great thing about Olympic hockey, he says, is that you never know.

Ever since the Olympics allowed in professional NHL players, it's changed the calculus. The winner is the team that has the most talent, that can learn to work together in the fewest possible games.

Team USA coach Dan Bylsma knows this. Normally the coach of the Pittsburgh Penguins, he says they didn't simply choose all the best scorers in the NHL — they chose guys who have worked together before, and who matched up well.

It's not all brains. Team USA does have some great physical talent. Zach Parise of the Minnesota Wild is the team captain. Patrick Kane of the Chicago Blackhawks is the go-to guy.

But the team doesn't have as many great players as the Canadians. How could it?

The joke going around Sochi is that if you rounded up all the Canadian players who didn't make the Olympic team, they would probably medal also.

But Krabu says Canada isn't the only threat to the U.S. Sweden, for instance, works better as a unit.

"They have common background," he says. "They have the same hockey education, so they know how to play with each other." 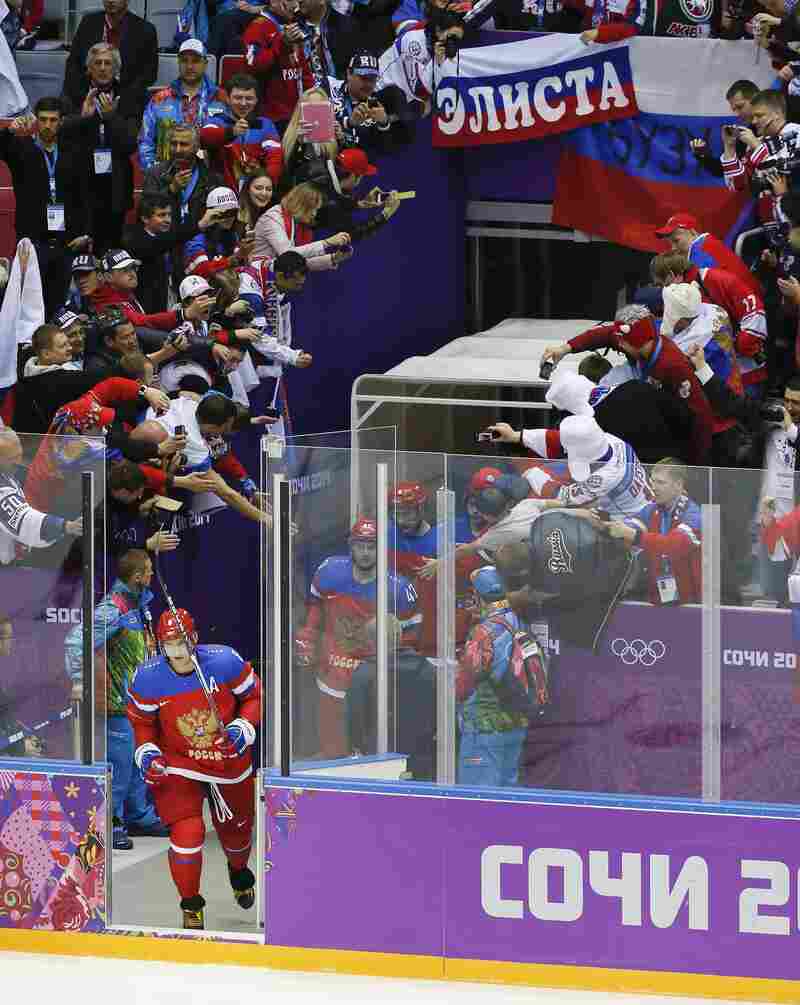 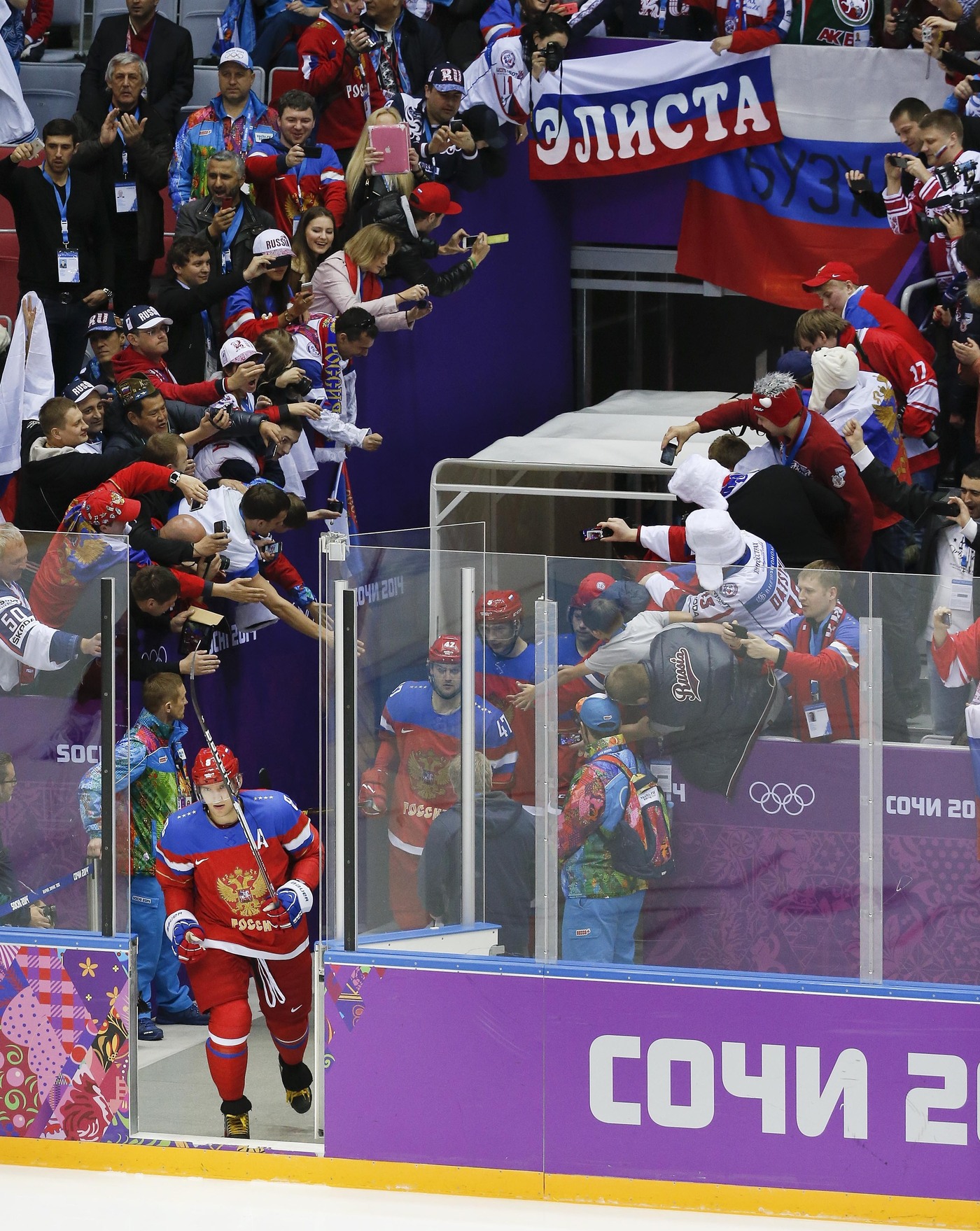 Russia forward Alexander Ovechkin steps out onto the ice Thursday before a match against Slovenia. The Russians won 5-2. On Saturday, they'll meet Team USA.

And what about Krabu's home team, the Russians? He says there is a tremendous pressure to win here.

"One thing that could work for the team, and against the team: You can handle pressure, and it may help you, like it help[ed] Canadians in Vancouver. And on the other hand, if you do not handle it properly, it may destroy you."

The most pressure is on the shoulders of Team Russia's Alexander Ovechkin. The Washington Capitals player is the single biggest thing in Sochi. His face is on every Coca-Cola billboard and ad — and you know Coca-Cola doesn't skimp on the ad budget.

He stared down at reporters at a news conference with his tough face, his trademark missing tooth and his booming voice, as translated by a young woman: "We understand what we have to do, and we will fight for the results in every match."

That sounds less intimidating in translation. But listening to Ovechkin, you can tell how much Team Russia is animated by history. They talk constantly of the 1980 Miracle on Ice upset, when they were beaten by Team USA. And their loss four years ago in Vancouver.

And the fans want revenge. Already the Russian hockey games are the hottest ticket in Sochi. And the first big moment: Russia vs. Team USA on Saturday.